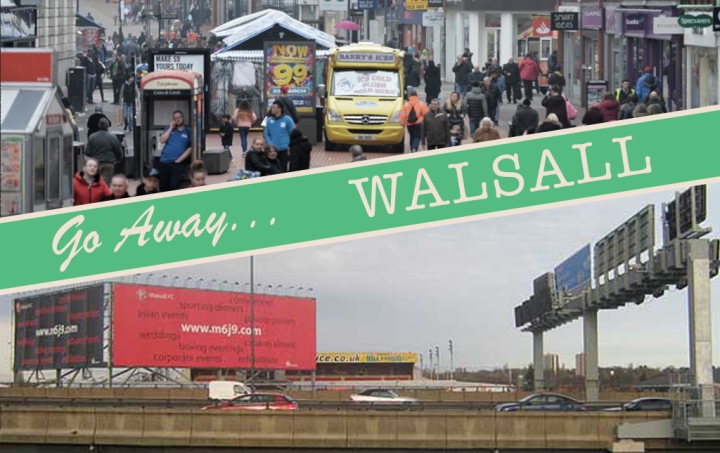 New season, new division, new opponents, new feature. League One. Just the name alone is enough to send a chill down your spine. A new place, a darker place. Home to the unfamiliar (Crawley), and the long forgotten (Stevenage), it is a savage foreboding environment into which we must stride purposefully and show no fear, because ultimately these towns and these teams are just as frightened of us as we are of they.

To help you acclimatise to this unfamiliar environment the fanzine has decided to launch this new feature, a comprehensive guide to the towns and clubs that the Rovers will visit, and you may venture to this season. This new travel series; ‘Go Away!‘ begins with tomorrow’s opponents, Walsall. Happy traveling.

Tell me more about Walsall

Located in the county of Staffordshire, Walsall is known as ‘the town of a hundred trades’, which is both a tongue in cheek reference to nearby Birmingham’s moniker as ‘the town of a thousand trades’ and also an accurate reflection of the town’s latest employment figures in the wake of cuts undertaken by the current Conservative government. However, it should not be confused with ‘the land of a thousand dances’, which is of course, Wolverhampton. Despite being first mentioned in a document from 1002 Walsall isn’t referenced in the Domesday book, primarily because the publishers were keen on a happy ending.

What’s it famous for?

During the Industrial Revolution Walsall changed radically from a village of around 2,000 people to a thriving town producing, most prominently, leather saddles. As you would expect from a town of this traditional craft boasting a team called ‘The Saddlers’, to this day most of the local population choose to travel on horseback. As such it is important to watch where you step as you move around the town. The leather trade has made the town popular with the Royals, for the Prince of Wales’ saddles have traditionally been made in the town, and also made it a favourite haunt of Max Mosley.

The town is also famous for the Walsall Illuminations. This phenomenon occurs in December each year when the young folk who had left the town for University return, remember just why they left in the first place, and scarper back off to their studies as quick as possible.

How does one blend in?

Saddle up your horse and head to the nearest saloon for a pint of Bank’s Bitter and a plate of Grorty Dick (note: ‘plate’ not ‘case’). Read the Express & Star and lament the fact that you should never have let Ray Graydon leave.

You’re Just a Small Town in…

Birmingham would be the go to large neighbour to finish the song off with, but as Walsall falls within the West Midlands conurbation, this could be perceived as factual. West Brom scans well, but then the town isn’t called West Brom, but West Bromwich so rather than get into the murky waters of shortening place names, the fanzine recommends Great Barr as the song ending of choice. Suggesting their traditional industrial town is a satellite of the relatively modern suburban sprawl of Great Barr should guarantee the maximum amount of Black Country outrage, whilst also impressing with our knowledge of local geography.

The Bescot Stadium is one of the most ingenious of modern football stadia, adapted as it is from a disused service station on the M6. The Stadium was opened by Sir Stanley Matthews in 1990, the veteran winger having stopped off for a pasty on his way back to Stoke was somewhat bemused to find the place empty with a big green grassy rectangle where the crisps used to be. He eventually relented to the cheering crowds, cut a ribbon and decided to press on to the Stafford Road Chef for a sausage roll.

Those passing on the motorway will have perhaps failed to notice the ground, situated as it is behind a giant advertising board. This has not been erected, as is commonly misconstrued, to bring in additional revenue, but so the team can stealthily drive out from beneath it for away games, escaping from their secret Saddlecave, aboard their Saddlebus much like the 1960s Batman television series.

Away supporters are housed in the Extra Bet Stand behind the goal, which is an all-seater covered stand. Apparently it’s low, metal roof has enabled past sections of visiting supporters to create a real atmosphere, so our top tip for visitors would be to leave the space-suit in the car for this one.

How do I get to the Stadium?

I’m not a driver, so forgive these slightly vague directions. Head south on the M1 then take the A42 and M42 towards Birmingham before joining the M6 northbound. Leave the motorway at Junction 7, and follow signs for Walsall on the A34. Once in Walsall ask someone for directions to the ground, or look for a bloke in a Walsall scarf and follow him.

Just like Exeter City’s St James Park and Manchester United’s Old Trafford, Walsall’s Bescot Stadium is unique in having a train station at the ground, so you’d be a fool to get off anywhere else. The station is served by London Midland trains from Birmingham New Street station. I once found myself within six feet of David Cameron at New Street station, so be careful.

Lastly, any familiar faces in the Walsall side?

James Baxendale joined Walsall in the summer, where he has been reunited with Richard O’Kelly. Two time Saddlers Player of the Year Andy Butler is from Doncaster too so he might be familiar to some of you, whilst striker Will Grigg looks a lot like a lad called Rich that I went to Uni with.

One thought on “Go Away! Walsall”