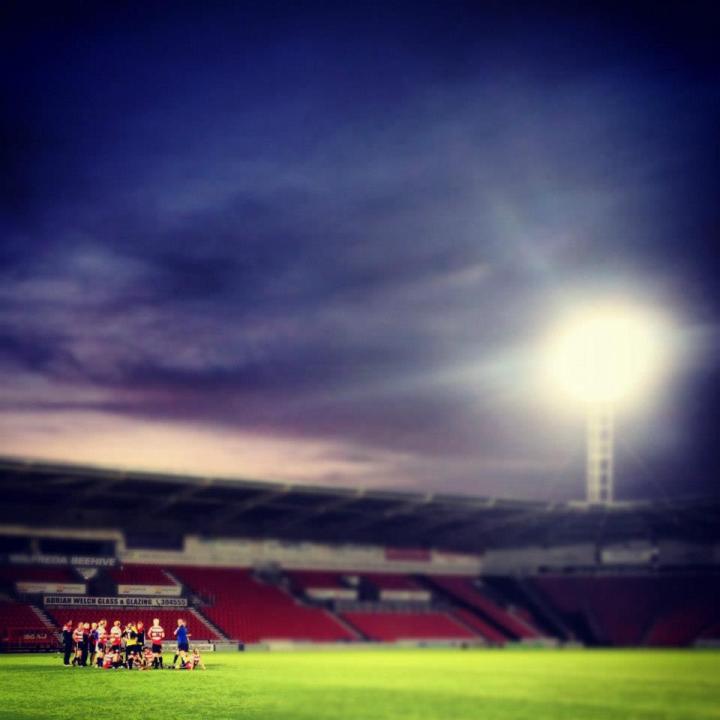 It’s that time of year again. League tables are starting to be annotated with Ps and Rs, play-off dreams are being shrugged off and put down to the cheddar eaten before bed, and the summer stretches out ahead of us as a long expanse of nothingness in which we’ll have to feign an interest in tennis to get our sporting kicks. But, it doesn’t have to be that way. Because as one season ends another one is just beginning. Step aside fellas, here come the Belles.

The Doncaster Rovers Belles kick-off their latest FA Women’s Super League campaign this weekend as they host Chelsea at the Keepmoat Stadium after the Rovers match with Notts County. After finishing seventh in each of the previous two campaigns since the FAWSL’s inception the Belles will be hoping that they can make strides forward this summer before the league’s restructure for 2014.

They may not have taken to the field in the league yet, but the Belles have already begun their season; beaten 2-0 by Bristol Ladies a month ago in an FA Cup 5th round tie played out on a rain drenched Keepmoat pitch. Though the visitors had controlled the first half of that fixture and deservedly led 1-0 at the break, the Belles will feel hard done by having conceded the killer second goal just as they were starting to find a firm footing in the fixture and look to form a solid platform on which to build their season. Since that loss postponements to the Continental Cup fixtures against both Chelsea and Everton have left Belles kicking their heels whilst waiting for a chance to put that result, something they will be keen to do against Chelsea this weekend.

The extended rest period may not have been ideal, but it has contained some plus points for the Belles, not least in that it gives their undoubted star player Sue Smith further chance to recover from injury and be part of the current campaign. Smith, who won over 90 caps for England was signed ahead of last year’s campaign to bring much needed experience to the Belles side, but unfortunately suffered a serious knee injury on her first competitive outing for the team – in the FA Cup at Barnet – and is yet to make an FAWSL appearance for the Belles, a millstone that will hopefully be cast aside this weekend.

Aside from Smith the core of this season’s Belles squad is focussed very much on youth.  The departure of established players such as Irish international, and fanzine favourite, Aine O’Gorman and captain Katie Holtham will give the opportunity for Doncaster’s younger stars to seize the initiative. Jess Sigsworth, Beth England, Kasia Lipka and Millie Bright have all been involved in England age group sides over the summer and all four started in the FA Cup defeat against Bristol City with England and Bright far and away the supporters’ choice for player of the match on that wet afternoon, an accolade ultimately just shaded by Bright.

As well as O’Gorman and Holtham the Belles will also begin the season without goalkeeper Mary Earps who joined Birmingham City in the summer as well as the Canadian duo of Alyssa Lagonia and Tania Pedron who have not returned from North America. John Buckley has moved to fill the gaps though with goalkeeper Nicola Hobbs returning to the club after two years with Super League Lincoln to fill the vacancy between the sticks. Also new to the set-up is one-time England Under 17 midfielder Emma Thomson who joins from US side Boston Breakers, and the experienced forward Cheryl Foster; the all-time leading Welsh cap holder arriving from Liverpool in the summer.

Though the Belles are yet to kick-off their campaign the 2013 FAWSL got under way last weekend with this weekend’s Belles opponents Chelsea held to a 1-1 draw at their Staines Town home by last year’s runners-up Birmingham City. Sofia Jakobsson had given the London side the lead, but her goal was cancelled out in spectacular style by Rachel Williams who secured a point for Birmingham with a twenty-five yard screamer that cannoned in off the underside of the bar. Last year’s bottom placed side Liverpool were the first to lead the way this season; the Reds created a hat full of chances away at Lincoln Ladies but eventually it was just a single goal from Natasha Dowie which won the match at Sincil Bank. They have since been replaced at the head of the Super League by Bristol Academy after they won a seven-goal thriller against Everton at the Stoke Gifford Stadium last night; Corinne Yorston’s late goal winning it for the home side.

The Belles have worked hard to make their fixtures family friendly events in recent seasons and this weekend’s game is no different. Ahead of the match Dion Dublin and Des Walker will be meeting fans, whilst Nottingham band The Establishment will lead the pre-match entertainment which also features the Nottingham Revival Gospel Choir and Bradford Bulls cheerleaders The Bullettes plus a number of giveaways including t-shirts, programmes and even bells, to help you join in with the self-styled ‘Noisest Fans’ in the Super League.

So whether Rovers are celebrating a huge stride toward promotion or hastily doing the maths over what exactly is needed at Brentford come 5pm Saturday, we at popular STAND urge you to take the opportunity to hang on at the Keepmoat Stadium for a bit longer, get a drink, relax, and then ring out your free bell to lend your support to the town’s too often forgotten football stars.

ONE TO WATCH – MILLIE BRIGHT

Cards on the table, we’re a little biased with this selection, as Millie Bright is being sponsored by popular STAND this season, but we pick her out with good reason as there is much more to Millie than our logo next to her name in the programme.

Millie is described on the Belles website as a “tall, powerful, athletic striker with an good eye for goal”. And it is hard to disagree with that description. Her willingness to put herself about on the field was certainly reflected in the FA Cup match with Bristol last month as Bright left the field so coated with mud that neither her hoops nor her number were visible. It was a committed display which earned her a deserved ‘Player of the Match’ award.

Signed from Sheffield United’s academy in 2009, Millie made here Belles debut against Watford in August that year just after her 16th birthday. Just a month later the forward struck her first senior goal, netting in the 5-0 League Cup victory over Leeds City Vixens.

Having been on the fringes of the Belles’ side during the inaugural FAWSL season in 2011 – making just five appearances from the bench – Millie became a more integral part of John Buckley’s plans in 2012. After scoring a fantastic goal in a pre-season win over Manchester City Bright retained a regular place in the side with 12 appearances and two goals, one in each of the 2-1 victories over Lincoln Ladies.

Her impressive performances for the Belles in the FAWSL saw Bright selected for the England under 19s squad in 2011 and she has continued to be part of the national age group set-up, playing for the under 23s in February whilst still just 19 years of age.

We’re hoping for big things from Millie this year now she has made the number 10 shirt her own, and we will endeavour to keep you p to date with her progress during the season.