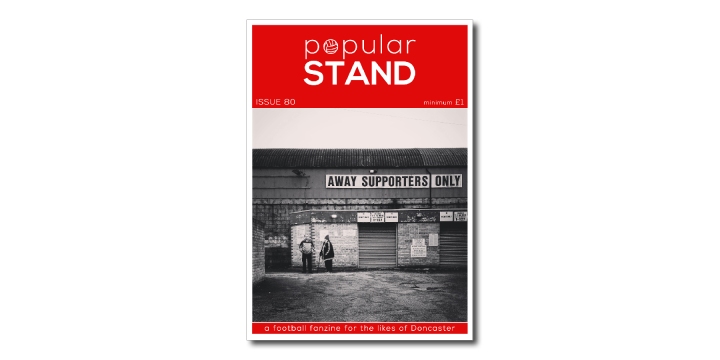 In a week where the prices faced by football fans have been all over the news, we’re back with what is probably the best value product in the whole of English football. Yep, it’s issue 80 of the almost award-winning popular STAND fanzine, giving you 40 packed pages on Rovers and wider football, all for the minimum of just £1.

Ahead of Rovers’ home game with Sheffield United we’ll be outside the Keepmoat Stadium selling the fanzine from around 1:30pm. Look for us by the statue, outside the South Stand turnstiles, near the Belle Vue Bar and outside the West Stand (north end) turnstiles. Don’t forget all profits from popular STAND go to local good causes – with £1,000 donated in December – so if you’re able to pay more for your copy then please do so.

The real joy of editing popular STAND is getting a first look at the work of some really talented writers. The fanzine’s contributors include two editors of national publications, as well as other published authors and writers – all of whom are Doncaster Rovers supporters. Here’s a few choice quotes from just a handful of the articles that make up another great edition of the fanzine.

I have never seen footage of that glorious day at Victoria Park, and I sincerely hope I never do, for it could not hope do justice to the action I have already conjured for myself.

The coal dust has gone, the mills are silent and the sulphur from the iron works is drawing its last breath but pessimism and cynicism is alive and well. In Doncaster at least.

Be honest, look inside of yourself, is it any wonder I can’t find it in myself to get excited about Colchester away, when I’ve got that shit at the flick of a button?

Though most Brummies or Welsh folk wouldn’t necessarily associate themselves as being ‘northern’, there is certainly a collective outlook on life shared by most folk upward of Gloucestershire.

It’s not perfect – you still have to mute Jonathan Pearce and listen to John Motson’s unfortunate onset of senility – but at least I’ve ceased throwing shoes at the television.

Here’s the complete run down of what’s inside issue 80 of the fanzine; and absolute steal for the minimum price of £1