popular STAND was launched in 1998, when all this was nowt but fields, and when Doncaster Rovers stood on the brink. One of several Rovers related print fanzines – following on the heels of Raise the Roof, No Smoking in the Main Stand, and Keegan Was Crap Really – popular STAND was a much-needed collective mouthpiece against those seemingly intent on driving the club out of existence. ‘At the time I thought that the other fanzines that were around were being too easy on the club’s owners and its plight,’ explained founding editor Liam Clayton. 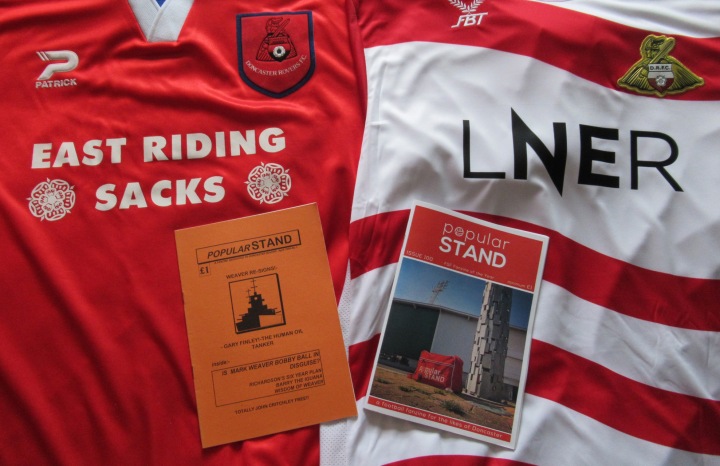 Thankfully Rovers were to be rescued from the grasp of the fire-starter Ken Richardson and his chief puppet Mark Weaver, and were able to begin a new life in non-league. Though the reason for the fanzine’s foundation may have therefore been tempered, popular STAND continued on into Doncaster’s League exile to give a considered view on all things Rovers. Clayton, initially partnered by Sean O’Keefe, remained as editor until Issue 9, when he was superseded by Nathan Batchelor. Lucy Burke, another long-term contributor soon stepped up to become co-editor with Nathan and the pair remained at the helm for 42 issues; a period which brought unparalleled success for the club as Rovers climbed from the bottom half of the Conference to the edges of the second-tier play-offs.

Whilst Rovers were picking up awards on the field, the ‘zine earned recognition of its own, most notably second place in the sports category at the 2005 Emap Fanzine Awards. Unfortunately work and other commitments meant that Nathan and Lucy were no longer able to spare the time needed to produce the fanzine, and the pair stepped down as editors in 2011. So as to preserve the presence of a print fanzine at Doncaster long-term contributor Glen Wilson stepped in to take over as editor, starting with Issue 52 launched in April that year. Glen’s editorship has brought a number of respected national writers and editors to write for the fanzine, and has also seen popular STAND earn national acclaim. The fanzine was named FSF Awards’ fanzine of the year in 2016 and 2018, and was a runner-up in the same category in 2014 and 2017.

All profits from popular STAND are donated to good causes, sports clubs or local charities in Doncaster. Since 2011 we have given away over £11,000 in donations to, among others, Rovers’ Incatrek NSPCC fundraiser, the Louey Jacob Sharp Foundation, Doncaster Foodbanks, DRASACS, Donmentia, and Doncaster Women’s Aid. We are also proud kit sponsors of Donny R’sonists iFC who have been representing Rovers just about as long as us, and currently sponsor the kit of Doncaster Rovers Belles midfielder Nadia Khan.

This website exists to both continue awareness of the ‘zine between issues, but also try and offer a bit of reasoned and distanced opinion on all things Rovers online, something which can often be found lacking in the continuous digital rant that is the internet.

One thought on “Fanzine History”