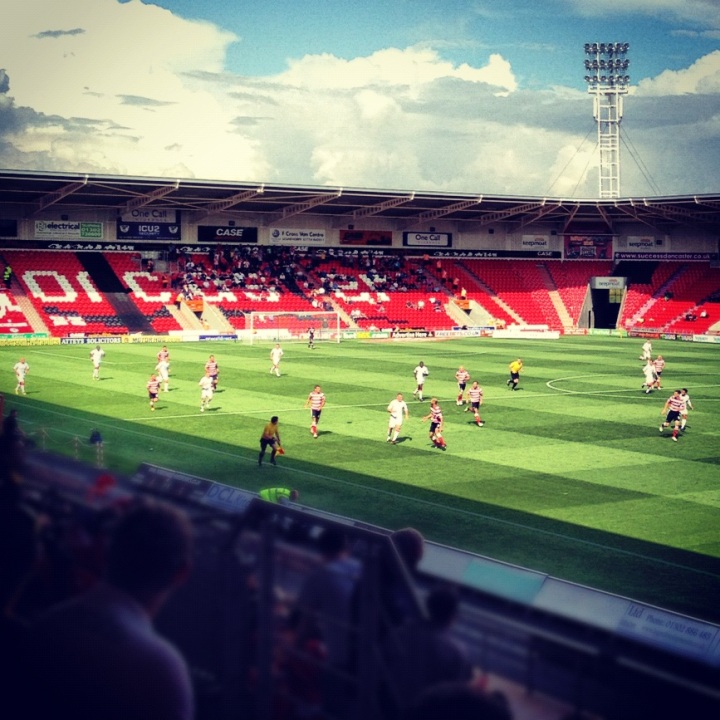 Selling the fanzine over the course of a season gets you many things; sunburn, pneumonia, ignored, to name but three, but it also gets you an insight into the mood of supporters. Standing outside the ground for an hour and a half watching the day’s attendance drift by you are able to gain a sense of the fans’ prevailing mood. Saturday, was the first time in a year I had sold popular STAND to generally happy people. Yorkshire folk aren’t known for showing their emotions, but still, the overall optimism and enthusiasm brought from starting a new campaign with back to back wins was clearly evident.

Of course, for an insight into the mood of fans you could always look to the main messageboard, but these days online opinion only seems to deal in extremes. If you wanted to fashion a barometer of the prevalent post-match mood on the VSC forum for example all you would need to do would be get hold of a metronome, label one side ‘Gleeful Abandon’ and the other ‘Doom-laden Anger’, and set it going for the season. Check back intermittently, it’d be right most of the time.

By the end of this game moods would have swung once more on the forum; ‘Disgraceful’, ‘A day to shame Doncaster’, ‘The end of the world as we know it’… only one of those is made up. And it had started relatively well. Actually, that’s a bit of a lie, it had started with referee Trevor Kettle showing he was here to let the game flow in his own inimitable style, the Hoover Dam to football’s Colorado River. Inside two minutes Kettle was soaking up the boos for refusing to restart play until Kyle Bennett went off for treatment, treatment that he neither wanted nor needed. Classic Kettle. Before the quarter-hour mark he had been called, by the folk around me, a prat, a pillock, a clown, a wazzock, and my own favourite, a dumpling. And that’s just the repeatable ones.

Anyway, against a backdrop of the lot calling the Kettle slack, and 100 Crawley fans flying in the face of irony  to chant about empty seats, Rovers were enjoying a bright enough start. David Cotterill had whipped in a good low cross for Chris Brown to turn goalwards only to be denied by a good save, and down the other end the back four of Paul Quinn, Jamie McCombe, Rob Jones and Tommy Spurr looked encouragingly solid. This was my first viewing of Jones, big sod isn’t he? If he weren’t a centre-half he’d be the unofficial bouncer of a village pub, keeping the peace without word or action from his permanent spot propped up at the bar, all for a free bag of pork scratchings every other night and the occasional lock-in.

For the first half an hour the better chances continued to go Rovers’ way; Spurr arriving just too late to convert a Brown cross. Billy Paynter controlling well, but firing wide from the edge of the box. Paynter would have a seemingly easier chance soon after as Cotterill put in another cross from the right, but Paynter, unmarked, jumped too early and when he did meet the delivery, his header barely had enough on it to carry itself wide.

I’d been trying since kick-off to workout who Crawley reminded me of, and ten minutes before the break it came to me, it was every side Rovers faced at home in the 1998-99 season. Effective, organised, slowly sounding us out, taking so much time over set-pieces and dead-balls they were in danger of delaying the kick-off of the Belles game. In the closing ten minutes they began to threaten, a few chanced long-range efforts just the wrong side of the woodwork, a squandered one-on-one break. I tweeted at half-time that they “look like they’ll score if we don’t”. It’s rare that I get this stuff right.

In the second half Rovers would offer little to nothing, and players and fans alike would start to get frustrated. Brown injured himself haring back to foul Sergio Torres and had to be replaced by Jamie Coppinger. The introduction of Copps brought a great cheer from the Rovers fans, but with Brown off the Rovers attack had lost its focal point and they would struggle to threaten from their on in with nothing on offer in the final third. Paynter’s second half presence was minimal. He was a minimalist Paynter. He was Piet Mondrian.

And as the game went on, and Rovers failed to create opportunities or contain their opponents the unrest in the stands increased, the anger seemingly proportional to the unfamiliarity of Crawley’s name as a Football League team. Without any consideration to the pattern of play on the field, or the relative strength of the side’s, the general perception was that we should be beating sides of Crawley Town’s ilk. It was all a little hypocritical from those who support ‘the likes of Doncaster’. The bloke next to me was particularly vexed, driven to some obscure similes and metaphors; an injury to a Crawley player was “like the Jungle Book”, whilst the visitors were being afforded by Kettle “enough time to do a paint by numbers”. I lost a good three minutes of the second half pondering that. Why paint-by-numbers? Are they particularly time-consuming?

The inevitable came three minutes from time. Josh Simpson’s low drive, turned just inside the far post by the outstretched leg of Nick Ajose. As it hit the net, the heavens opened, and a large number of Rovers fans streamed for the exits in the downpour. On the balance of second half play it was as much as the visitors deserved, but was it really the disaster it was made out to be? Crawley were better organised and more resilient than Rovers previous two League One opponents, they’d done their homework, as shown by the little space afforded Bennett throughout. Currently Doncaster have very few options beyond what takes the field at kick-off. In short, in a season of regrouping, and reassessment, these sorts of defeats will happen.  We’ve lost to a solid third tier side, and I’ll wager we’ll do it again before the season’s end.

Defeat is a feeling which has sadly been all too regularly experienced by the Doncaster Belles this season. Sadly few Rovers fans stayed on for their FAWSL fixture with Arsenal, which followed an hour later, the double-header experiment perhaps offering up more football than most Doncastrians were prepared to take in. Perhaps it may have been different had Rovers won, perhaps it may have been different if the Keepmoat tannoy actually worked and folk could have been reminded that they were allowed to stay. Who knows, but hopefully more can be encouraged to stay and back the Belles at the next double-header in a fortnight.

What this particular FAWSL game did highlight was the disparity that exists between the top and bottom of an eight team division. The Belles, sitting at the foot of the table, had scrabbled together the close season funds for a single marquee signing, Sue Smith, and she was sadly unable to exert much influence on the young Doncaster side from her position in the seat behind me, the former England international having been ruled out for the year with a knee injury before the season had begun. Arsenal in comparison fielded a starting XI with over 620 full international caps between them, and they’d bring on an additional 144 from the bench before the game was out in the form of Faye White and Jennifer Beattie. The difference was striking. The Belles’ had 43 full international caps in their line-up, 39 of which belonged to Aine O’Gorman.

This is a young Belles side and they will have learnt much from facing a side with the calibre of Arsenal, who looked in control throughout the fixture. The Gunners’ seemingly did what they had to do without overly exerting themselves, and with the quality they had at their disposal the last thing the Belles could afford to do was make soft mistakes. Unfortunately that’s exactly what they did inside the first ten minutes; the unfortunate Lyndsey Cunningham caught in possession on the left and two passes later Jordan Nobbs had slotted it home. Arsenal would double their lead in similar fashion; Victoria Williams losing her footing in midfield and via Kim Little and Kelly Smith, Nobbs struck again. And by half-time they’d added a third; Katie Chapman finishing from Niamh Fahey’s through-ball.

After the break, the Belles settled, the pressure perhaps off them, and played some neat, short, passing football at times, but it lacked the incisiveness to really trouble Arsenal in the final third, and but for an effort from Millie Bright that was deflected just wide their attempts were restricted to long-range shots, most notably from O’Gorman, that failed to trouble Emma Byrne. Kim Little wrapped up the scoring for Arsenal with a neat finish from the edge of the area that left Mary Earps with no chance and drew applause from the few hundred in the East Stand. Perhaps, playing their home games in front of a pre-season friendly like atmosphere isn’t doing the Belles any motivational favours. Your home ground can’t be perceived a tough place to visit when by far the loudest shout of the game is one from the referee proclaiming “Advantage!”

Post-match manager John Buckley lamented the fact that if Belles had a little more money at their disposal they could become more competitive in the FAWSL by tempting the fringe players away from Arsenal for a regular start. It’s hard to disagree with that hypothesis, it wouldn’t bring the Belles a title challenge, but it would certainly put them right back in amongst the pack. The young Belles side have much to be proud of in their efforts to bridge the gap, but continually having to hold your hands up and acknowledge a better, more strongly backed team can’t be easy. The run of defeats is now surely starting to tread that fine line between character-building and morale-breaking, but with limited support from the town and the public, all the Belles can do in the face of such strength in opposition is keep on keeping on 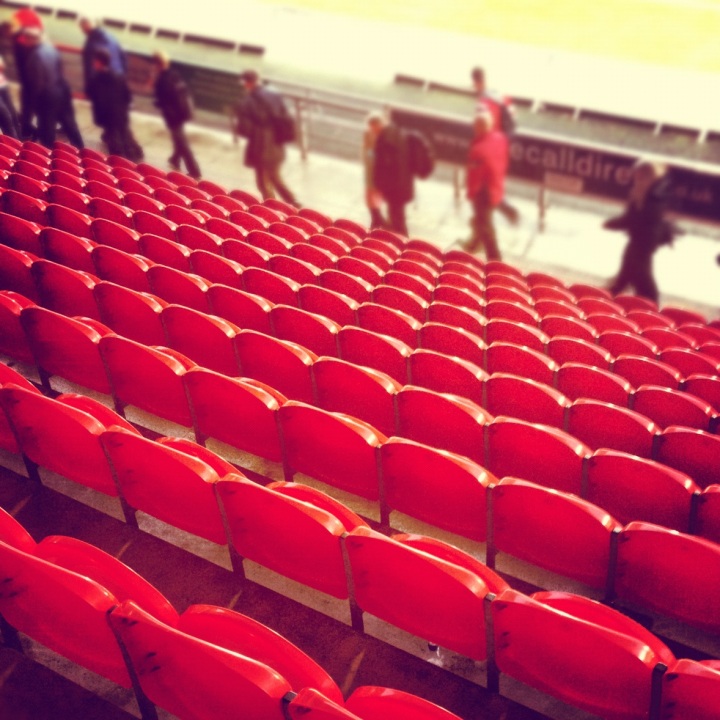