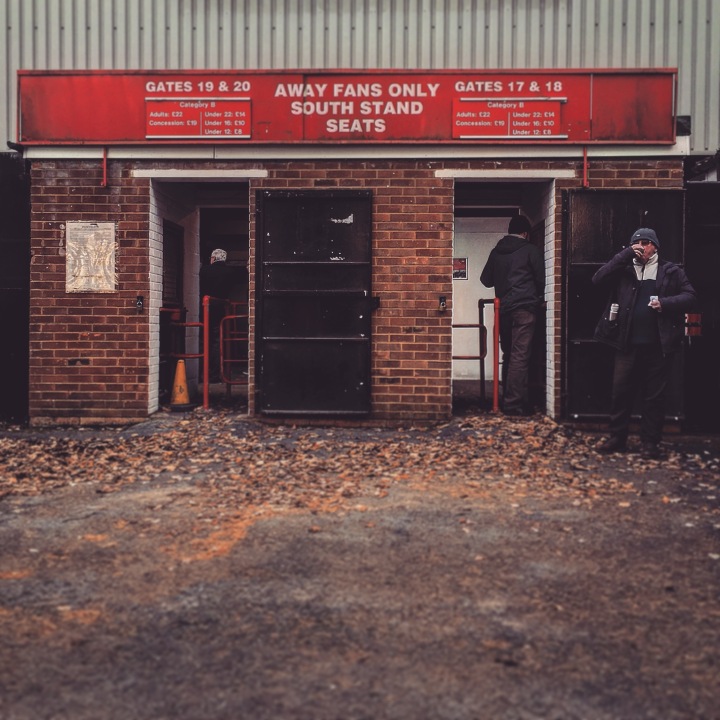 Issue 60 of the fanzine went on sale at Saturday’s game against Shrewsbury. As a taster to what you will have missed if you failed to get your hands of a copy we bring you Glen Wilson’s editorial on modern football pricing and consumerism.

Let me start by thanking you for bravely striding towards one of our band of frankly odd-looking fanzine sellers to purchase Issue 60 of popular STAND. You’d be surprised by how many people don’t, and the stilted communication of a fanzine sale is the only human interaction our sellers get outside of captivity.

In monetary terms this transaction cost you just a pound. Just as it has done for the preceding 59 issues. Fifteen seasons without a single price rise; there can’t be much in football, if anything, which can offer a similar boast.

You don’t need me to tell you modern football is expensive. You don’t need me to, but I’m going to anyway. However I’m not about to wax lyrical about a sepia-tinted mythical age when we could go watch a match, have six pints and a fish supper on the way home and still have change from a shilling, because I can’t. In my adult life, I’ve never known attending football as anything other than a dear do.

The key problem with football pricing – from tickets, to merchandise, to players even – is that it is insular. Cost comparisons, assessments on value for money are only ever made in relation to the other participants in an over inflated game. It’s like promoting your Faberge egg as a worthwhile purchase because it’s cheaper than another Faberge egg. Take ticket prices for example, clubs will often boast their match tickets are cheaper than other sides in the same division, but what comfort does that offer us? So what if we’re £2 cheaper than Colchester? Or £1 less than Oldham? It’s not like we’re shopping around for our football. We’re Rovers fans… we’re stuck here.

What is considered reasonable pricing in the world of Faberge eggs is still, in the real world, seen as a ludicrous price to pay for a jewelled orb you can’t even dip your soldiers in. And so it is with football. £20 is reasonable compared to the rest of League One, but in the real world that twenty pounds could provide you with much more than 90 minutes of twenty-two men taking it in turns to try and con a fella with a whistle and his two mates.

But, like too many facets of modern football, it has just become accepted as the norm. Supporters make up the shortfall for players’ earnings. The reasoning is competitiveness, if we want our side to be competitive, to be challenging then we have to pay £20. Somehow we’ve just come to accept that it takes 6,000 people to cover the salaries of 18 sportsmen.

At the top level it is just another world, even further away, even further removed. Did those who paid a minimum £62 to watch Arsenal against Chelsea the other week really get value for their money? League football is becoming less a hobby, or a habit, and more a day out or an occasion. Watch Match of the Day, and when one of the six clubs that make up ‘the big four’ have a corner note how many of those spectators near the flag, rather than being caught up in the tension, are busy photographing the set-piece taker on their camera phone. Fans at the top level have been replaced by spectators, by tourists; for whom it is less about the result and more about getting a good close-up of Gareth Bale to use as their Facebook cover photo.

‘Modern football’ and all that encapsulates is now the norm for most folk under the age of twenty. Their whole footballing lives have been lived between Champions League Group stages and Super Sundays. That’s what football is. It’s the Premier League. The rest doesn’t matter. That’s not football, there’s no ‘banter’ outside the top flight, that’s all just a sideshow; an oddity for the freaks and the geeks. At some point we have all had a conversation with a colleague who professes to be a huge football fan that has included them asking “so what division are Doncaster in then?”  Our players aren’t available for selection for their Fantasy teams; ergo they’re not on the footballing map.

The other weekend I was watching the Football League Show – with the sound off naturally – whilst Clem took his own brand of over-familiar music teacher mateyness to Broadhall Way for a feature on Stevenage. During the piece, in between Clem harassing the staff with nonsensical questioning like a mauve jumper clad Jim Henson creation that had gone sentient, there was footage of the players signing autographs for young fans in replica shirts. Not Stevenage shirts no, Manchester United ones. What message does this send to the players? Can I have your autograph please as dad won’t take us to Old Trafford?

This is what they hype of modern football has spawned, children who’s allegiances lie hundreds of miles away, with people they will never see in the flesh; consumers of the product rather than supporters of the team. These children, and grown-ups, who walk round Doncaster in Chelsea shirts are what modern football has left us with, the living, breathing manifestation of those ‘my other car is a Porsche’ bumper stickers.

If you’ve enjoyed this article, we still have a few copies of Issue 60 available. If you’d like one, get in touch with us via the details on our ‘About  us’ page.

One thought on “Editorial: Finding value for money”