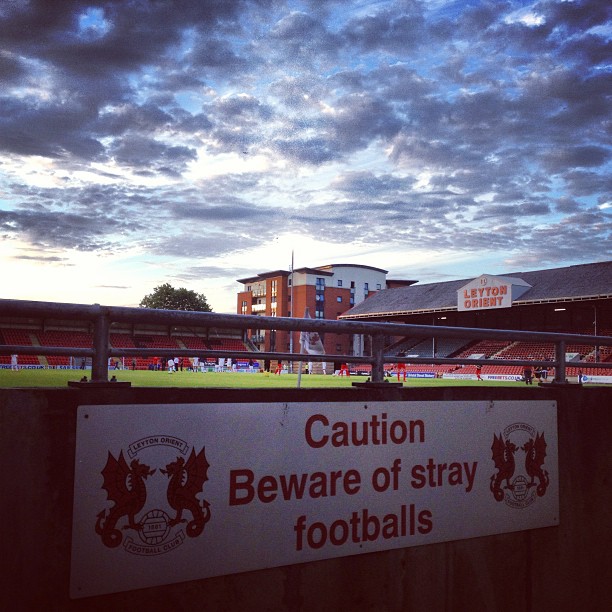 In issue 62 of popular STAND fanzine, Kerrang! magazine editor James McMahon explained how he came to be a Doncaster Rovers fan with a season ticket… for Leyton Orient.

Being one of those football fans who agrees with 85% of what David Conn says, subscribes to When Saturday Comes (although even I wish they’d shut up about the third division in Greenland once in a while) and says things to girlfriends like, “football isn’t really a game you know, it’s a canvas for society to paint stories upon” (I don’t currently have a girlfriend), it may not surprise you to know I don’t particularly subscribe to traditional rituals of football tribalism. I remember standing at Belle Vue once in the early nineties, bellowing “scum” at the pig pen during a Rovers v Scunthorpe game, then thinking “hang on a second, my Tae Kwon Do instructor comes from Scunthorpe. They’re a really nice person”. I was thirteen years old.

Now I’m thirty-two. “If football fans supported the sport as much as their team,” I’m fond of saying on twitter, normally whilst being infuriated by some Sky Sports programming, “then football would be in a healthier place”. But really, I believe this. I groundhop frequently. I will think nothing of attending live games as a neutral, just for the love of the sport. My whole ID as a football fan is based upon this principle. Which has led me to a place where I don’t know who to cheer for on Saturday, or, in fact, who I particularly want to win. I have become the person you hate Rovers faithful. No, not a Rotherham fan. But a two club man. A Rovers supporter…  who owns a Leyton Orient season ticket.

Okay, that’s not strictly true. Well, the bit about having a season ticket is, but there’s no division of love in my heart. I have one football related tattoo, and that’s of a stern looking viking, not a wyvern (for those not particularly versed in mythology, it’s like a duck crossed with a dragon). I also left my Orient season ticket at home earlier this season when the Rovers came to town and paid to sit with the Rovers fans in Brisbane Road’s rickety old east stand (then raised the issue of the east stands redevelopment at the Leyton Orient AGM a few months later – it’s complicated, all this). I am Rovers til I die. I was long before John Ryan stitched the slogan in any bit of tat the club shop can sell and I will be until, well… you get the point. But I am a little bit Orient too.

I was twenty-five when I moved to London, via a short stay in the north-east (where my football intake alternated between trips home to see the Rovers and the category C games in which Sunderland would host – I saw a lot of Bolton I remember) and, while I would instantly reply “Doncaster Rovers” whenever someone asked me what club I supported, I did feel like a bit of a fraud when I consequently told them I’d only been to seven games that season. And so my thinking led me down a troubled road. “I’m never going to live in Doncaster again,” I pondered (no snobbery, but I’m a music journalist and unless the Cantley scene flies, I’m not sure I can make a crust down there). “Is that me done with the community I crave from football?” And so I looked around for a London club I could pop along to, “just to watch a game, for a laugh like”.

I thought about it properly mind, taking into account past rivalries with theRovers and how likely we and they were to meet. It even took me a couple ofyears before I actually made sense of it in my head. Brentford? Too far from where I dwelled. Dagenham? Well, I went there once and saw someone hit another person over the head with a sausage baguette, I’ll give that a miss. Millwall? I admit it, I was a bit frightened (I hadn’t yet read Family, by Michael Calvin, the best book I’ve ever read about football). Okay, so the chances of Orient and Rovers – two clubs cut roughly from the same metaphysical cloth – meeting each other again should, in hindsight, have been pretty obvious to me. But O’Driscoll was manager, Rovers were in The Championship and I’d got a little bit carried away with all that “Barcelona of South Yorkshire stuff” at the time.

Not only that, but Orient’s team of 07/08 contained another man who had crossed the divide a year or so before me; Sean Thornton, he of bleached hair and brewery breath. Watching Sean piss around doing nothing at all for 89 minutes, then nonchalantly toe peg the ball into the top corner with just seconds to go, felt comfortingly familiar. Sure, I couldn’t quite understand where Michael McIndoe was (perhaps the first and last time I will share sympathies with the Financial ServicesAuthority) but it eased the transition for sure. Not that I cared yet. The plan wasn’t to care. Rovers til I die and all that. Then Southampton came to E10, conspired with the referee to steal a draw and I found myself out of my seat, emotional and fraught. It’s at these moments your heart makes the decision for you.

I’ve been going to the Orient for almost five years now. I’ve been going to the Rovers for almost twenty more. There’s no parity, no threat to where my allegiances lie. Yet as a Leyton resident, I’m proud to watch my local club most Saturdays. Proud to contribute something to the community in which I live. Proud of what a great football club they are. On Saturday I’ll probably go to the cinema or something, turn my phone off and go for a walk. Or stick my fingers in my ears and go sit in a well. I hope football is the winner, as the old cliché goes. But while I love Rovers and I like Orient, I’ll be forever be grateful to for the latter coming into my life. Yes, I am confused. But I am happy(ish).

One thought on “On Supporting Two Clubs”