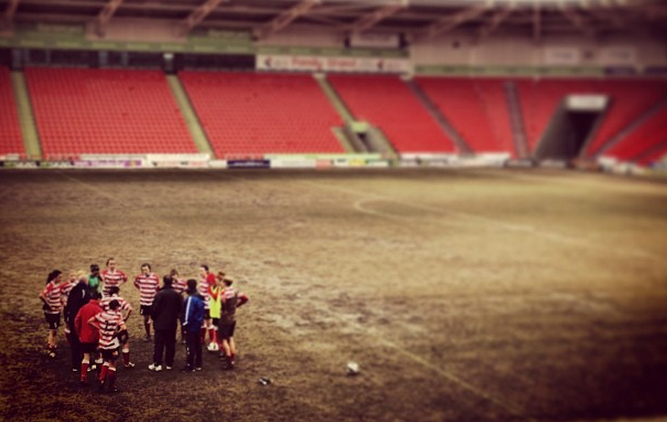 On Sunday night I wrote an article for this site about the Doncaster Belles and how they had been ‘relegated’ one game into the current season as part of the FA’s plans to expand the Women’s Super League. That piece has since had a lot of exposure, indeed it ensured Monday was the busiest ever day on this site (and today we’ve already had three times as many visitors as then), but what was most surprising for me was that it turned out to be the first many people knew of the situation.

Perhaps a reflection on the coverage on the women’s game, possibly because the FA made no real deal or fanfare of the announcement themselves, or perhaps because the news was released just a day before Rovers’ season finale at Brentford. Who knows? But at least our article has spread the word, and encouraged people to get angry, to move, and to act.

Linking the story on the main Doncaster Rovers fans’ messageboard encouraged several fans to write to the FA and make their feelings known. The first to write, PDX Rover, received a detailed but disappointing reply, so did the second person to write, Filo, the exact same reply in fact. This is it.

Thank you for contacting the Football Association.

The adjudication process will remain confidential between the involved parties as the information is sensitive. Below are the four main criteria by which the process was conducted.

The future of The FA WSL from 2014 forms a key part of the overall objectives of ‘Game Changer’, The FA’s new five year plan. This also includes the creation of an Elite Performance Unit, growing player participation and a new individual commercial strategy for the women’s game.

We do appreciate all of the feedback we receive from supporters. This feedback is collated and used to build a picture of public opinion and is subsequently fed back internally within the organisation. Please rest assured your comments will form part of this feedback process.

What is disheartening, yet sadly not surprising, is that of the four point plan, actual football-related merit represents just one aspect, tagged on at number four like an after-thought.

A bit of digging led me to the proposal base against which  prospective FAWSL clubs had to frame their argument for inclusion. I’ve read through it, and looked over the requirements section to see if I can see a reason for the Belles not to be included in the top flight, or at least to be at such a significant disadvantage that they wouldn’t be permitted to play for a place. I can’t find reason. I can’t find justification or explanation for all of the other accepted FAWSL1 clubs to hold an advantage over the Belles bar the one we’re all thinking; money.

Take the ground requirements for example. The Belles have their own home ground, people may think of the Keepmoat Stadium as Doncaster Rovers’ home but it was erected as a Community Stadium for the Rovers, Belles and Rugby League side to call home. That said there is one clause on which the Belles may fall;

3.1 The long-term vision is for clubs to own their own grounds: modern, family-friendly and at the heart of the community, welcoming 1,000 plus spectators week in week out. High quality pitches, and professional presentation of stadia is important to the league, its host broadcasters and commercial partners. However, it is also important that there is an exciting atmosphere at FA WSL matches, with crowded, busy stands, which present well on television and keep fans close to action.

So alas, their ground may be too good. So you may have the best facilities of all the clubs in the league, but that’s not as good as looking presentable on TV. Maybe if we erected one of those murals they had behind the goal during the reconstruction of Highbury.

The ‘community’ aspect of that clause is an interesting one, although chiefly the FA don’t seem to specify which community, so whilst the Belles are one of only three clubs to play in the community which give them their name the FA seems to be happy with flexibility on that; i.e. you can argue your community is actually elsewhere. Shades of MK Dons and all that.

The location of the ground, in so far as its relation to the conurbation whose name the club bears, or is traditionally associated with, must meet with the approval of both The Football Association and The FA WSL Board Sub Group or The FA WSL Management Committee of which it is in membership.

It is hard to see how Arsenal (playing at Borehamwood), Chelsea (at Staines), Liverpool (at Widnes) or Birmingham (at Stratford-upon-Avon) meet these criteria better than Doncaster do.

The one aspect of this proposal which I can find that may be harming the Belles at present is the section requesting applying clubs to meet projected minimum attendance targets. FAWSL1 clubs are expected to show that they are capable of attracting a minimum 550 fans to their games in their first season, 600 in their second and 700 in their third. The Belles home average this season is currently around 325, from two cup games and one league game, though their solitary home FAWSL game was attended by 650 people.

Whilst guaranteed attendances may be a ludicrous clause for a sports league (although it would perhaps suit all those Men’s Premier League fans who used to chide Wigan Athletic’s crowd figures as if it meant more than their form, ability and general footballing merit), it is one which those angered and enraged by this decision by the FA can do something about in the following two steps.

The Belles are in the process of forming an appeal against the FA’s decision, so to help with this I felt it important to quantify the outrage and sense of injustice. Saying 5,000 people disagree with you is better than ‘a lot of people’. So please sign this petition which argues that the Belles are deserving of the right to the opportunity to at least play for their place in the new FAWSL1

You can like all the facebook posts and retweet all the tweets you like but that won’t make one jot to the FA. The real way you can help the Belles is by showing the support they’ve long deserved and voting with your feet. Go to their games. They are the town’s to-ranked football team, they are committed to this community, and they deserve your support. Go along, shout, yell, clap, cheer, ring a bloody bell. Just make yourself seen and heard, not for the FA, but for the players themselves, to show that this town wants them and believes in them and is fighting for them in the same way that they represent Doncaster each week.

The Belles play Everton at the Keepmoat Stadium this Saturday. Entry is £6 for adults, £3 for children and concessions, and free if you take a bell. Go and make some noise and show the FA that we want to keep what the Belles have earned over forty-four years of hard graft and commitment.

16 thoughts on “The Belles’ Toll – Update and Points of Action”