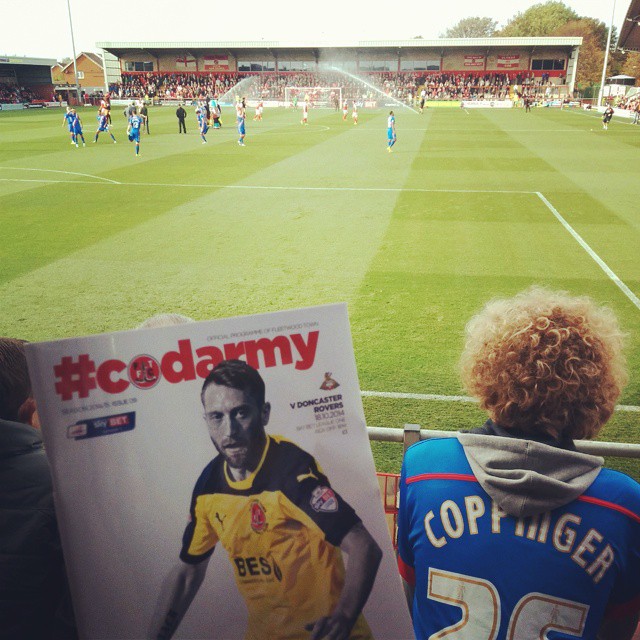 Fleetwood Town’s Highbury makes me ponder what Belle Vue might have now looked like, if some money had been chucked at it. It’s a ground that screams ‘non-league’, although that might just be the wind bouncing off the Irish sea – football grounds do of course not have the ability to vocalise, let alone make critical judgements – even if it’s obviously been quite significantly scrubbed up on Fleetwood’s astonishing charge up the leagues.

I tell you what else needs tarting up, he says, deftly segueing from one point to another… Rovers defence. Because frankly, it’s getting silly now. Fleetwood’s first, on eleven minutes, courtesy of Stephen Dobbie, a legend down the road at neighbours Blackpool, came as he found himself unmarked in the box after David Ball’s brilliant cross left Jamie McCombe (hooked finally, and with some desperation, for Theo Robinson on 83 minutes) looking dizzy.

Nathan Tyson’s deflected shot on seventeen minutes only prolonged the inevitable; a goal from Wolves loanee Liam McAlinden on thirty-seven minutes, and to put the game ultimately beyond reach, a shot eaked in from a tight angle by that man Ball on seventy three. Frankly, Rovers never looked in it. Jed Steer deserves credit for keeping the score respectable. Curtis Main looked lively once he got on (for Harry Forrester on the hour). Richie Wellens tried. A bit. And that’s it. Rovers are in desperate need of a leader. It would help if that leader was part of the defensive back line.