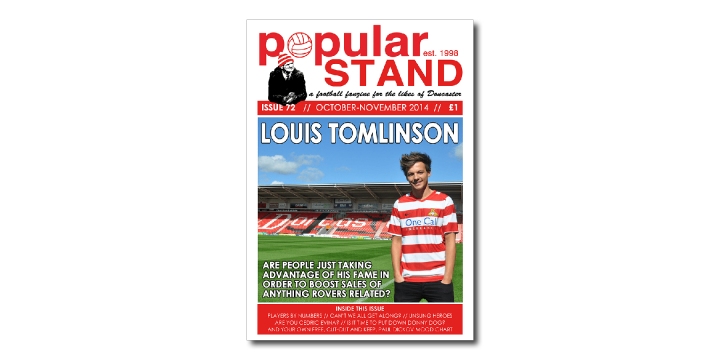 The weekend is almost here, and so we’re all excited at the prospect of football right? I mean what could be more thrilling than the prospect of a visit from the fallacy of a football club and shadow of credibility that is MK Dons? Especially coming as it does, on the back of two successive defeats? Wait, why are you crying? Where are you going? Come back, put that Radiohead CD down.

Anyway, the chips may be down at the moment, and they may be terrible, stale microwave chips at that, but it is at times like these that support is key. Football support is not all about glory. If it were we wouldn’t ever turn out at the Keepmoat. It is about, well, it is about support basically. Backing our team and our town against the others. Us against them, and so we will go to the ground tomorrow, and we will by a fanzine and we will take our seats with gallows humour about recent form, and we well get behind the team and the manager, whatever our wider thoughts about their ability or tenure, because ultimately we want our team to succeed.

If the new issue of popular STAND was to have a theme, it would be that notion of support and togetherness. We explore it in the editorial, looking at how Wales have boosted crowds and atmosphere at home games, and it is looked at further in Jack Peat’s piece on this being the opportune time to gain new supporters. And, as many will be aware, we also look at the rift that has been drawn between sections of our support, over the perceived purpose and sense of connectivity with the Supporters trust. This last issue is a difficult one, and one that has been – frankly – a pain in the arse to address. Why? Because increasingly it seems people want to take sides, rather than hold opinions. And when people side, rather than think and consider, too often debates become incorrectly simplified. This helps no-one. Particularly a football club. Hopefully, those who pick up a copy of the fanzine will share our view, that stubborn tribalism hinders only the club at large, and it really is time to move on, together.

Issue 72 of popular STAND will be on sale outside the Keepmoat Stadium at the South East and South West corners from 1:30pm until just before kick-off. It is, as ever, only £1 (a bargain for 40 pages) and all ‘profits’ will go to local charities and good causes.

Exact details, and a handy map, of where you can purchase your copy of the fanzine are available here.