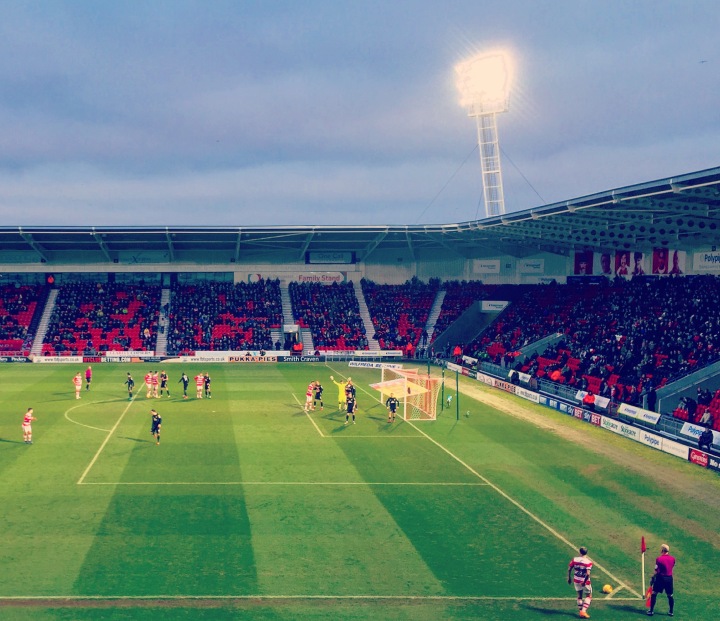 ‘You started celebrating that before he hit it,’ said Matt of Conor Grant’s opening goal; driven in low from the edge of the area. He was right. Such has been Rovers’ ruthless effectiveness in recent weeks you just know when it’s coming. Today it happened to be 22 minutes; it could easily have been earlier.

Crewe ‘keeper Ben Garratt produced two excellent saves either side of Grant’s strike; clawing a James Coppinger free-kick out of the top corner and somehow stopping Andy Williams at point-blank range. But when it seemed Rovers would dominate the visitors edged back into contention. Ian Lawlor unlucky to see his brilliant save from Chris Dagnall, turned back past him by James Jones. And but for two more smart Lawlor saves the Alex may’ve even ended the half in front.

The second half though was to be business as usual. A case of ‘how many?’ rather than ‘if?’ Matty Blair struck the inside of the post before John Marquis made it 2-1; the forward heading in Grant’s cross. Tommy Rowe made it three with a quarter of the game still to go; nodding the ball in after William’s superb header had bounced off both bar and line.

It wasn’t Williams’ day in front of goal, and he’d see another header bounce over the bar late on, but by then Rovers had already engaged cruise control for the second Saturday in a row.