It’s not a particularly funny issue of popular STAND fanzine, this one. It has its moments don’t get me wrong, and I don’t want to discredit those who’ve submitted lighter pieces, but I feel it’s only fair to call it up front. You’re good people, you deserve honesty, and likewise I deserve a break from the inevitable ‘it’s-not-as-funny-as-it-used-to-be’s that greet any request for feedback. It’s still good though, so don’t even think about asking for your pound back. You’ve committed now, roll with it.

See, the thing is, James McMahon’s piece on pages 30-31 of issue 91 is the most brutally and frighteningly honest piece of writing you’ll read in a football fanzine, and I don’t want to see one of my regular contributors put themselves out there on their own. So forgive me a moment if I weave away from how long Darren Ferguson has to sort it out, and whether John Marquis was a one-season wonder, and instead look at the bigger, broader picture because we, particularly we men, well frankly we just don’t do that anywhere near enough.

If anyone ever recites that Vince Lombardi lifted Bill Shankly quote to you about football being much more important than life and death, then you have my permission to punch them in the face, and use this editorial in your defence. You won’t get away with it, but least you’ll have just reason. Of course football isn’t bigger than being. It’s a sport, a pastime, a hobby, a game. In actual terms it’s never more than that and ultimately it doesn’t matter. We will play on and on ‘til the end of time, yet there will never be a finite winner, so why stress it?

But, and this is a but of John Doolan’s proportions, it does mean something. Our connection to it shapes us, and moulds us, and ultimately it offers us, as James reflects in his piece, a place to escape and forget everything and contemplate everything in equal manner. And it gives us that precisely because it doesn’t matter. You can’t stride into your job, relieve tension by loudly deriding twenty-two people, leave two hours later and expect to be able to come in and do the same all over again next week. Your job matters. Your family matters. Your relationship and your friends matter. Football matters not one fucking bit.

But. Yes another but. This one of a similarly meaty presence to Adebayo Akinfenwa’s rump. It’s still the thing that helps me through; watching football has always been the handrail that runs alongside the steps of my life. Why do I go to football each Saturday afternoon? Because I don’t know anything else. It’s a tie to the safety of my childhood, and in all frankness, it stops me from falling down a hole. The unhappiest period in my existence came when I lived furthest from a football team I could pitch up and lose myself in. It’s no coincidence. 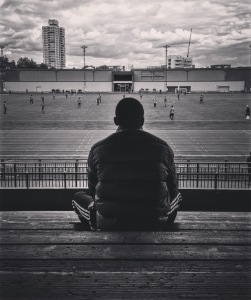 Even before that, living a ten minute walk from Worcester City’s St George’s Lane saved my life. And that’s no exaggeration. I’d reached a point where it came down to knowing that if I can just stretch out through the darkness for three more days I can be at the Lane for the Monday night match with Solihull Moors, and escape this flat and my thoughts and then everything will be OK. It saved me.

However, with any crutch their comes the problem of over reliance. Football has become an extension of me, and so then has this fanzine. I don’t open up about anything else, to anyone, and so when I meet up with people they ask me about football, and they ask me about this fanzine and then the conversation goes cold. I lament this fact, but know it’s down to me; I am ‘that Doncaster fan’, or ‘that guy who does the fanzine’, I have shaped this depiction by shutting myself off and clinging too keenly to my safety blanket, and not allowing myself to be anything more. I live my life in seasons and in Saturdays because that makes it easier, but I’m 34 now and that’s no way to be.

So football is an escape and a coping mechanism, or if you’re one of the lucky ones, then it’s just a thing you do. However it also isn’t what you are, and it isn’t what I am. Being a football fan is not an excuse to fold in on yourself. Being a man is not an excuse. ‘I’m not really one for conversation’ is no excuse. We need to stop finding excuses. We don’t tolerate them from football managers or politicians; we shouldn’t tolerate them from ourselves.

Talk. Say something. Because statistically, of the people you surround yourself with, here in this stadium every other Saturday, one in eight of them aren’t finding things easy right now. So whether you’re in the other seven, or you’re the one, talk. Use the football as a gateway, just don’t treat it as the all. Life and death aren’t matters of football; they’re more important than that.

So yeah, it’s not a particularly funny issue this one. But I’m fine, and so, I believe is James. And so next issue I’ll get back to moaning about ticket prices, or television deals, or Chris sodding Sutton’s sodding punditry, but every now and again you have to shake off your marker and make a darting run into space. I hope you’ll forgive me that.

The Campaign Against Living Miserably (CALM) is dedicated to preventing male suicide, the biggest killer of men under 45 in the UK. Whilst Muted, provide support and knowledge of depression in men. Should you need to, you can always talk to either of these charities.
CALM
Muted

popular STAND fanzine is the current FSF Fanzine of the Year, and is on the shortlist once again for the 2017 award. This is the editorial from issue 91, of which copies are still available. We are happy to post out issue 91 anywhere in the world for just £1 plus the cost of postage. If you would like a copy, let us know at popularstand@outlook.com

One thought on “Editorial: We need to stop relying on football to get us through”