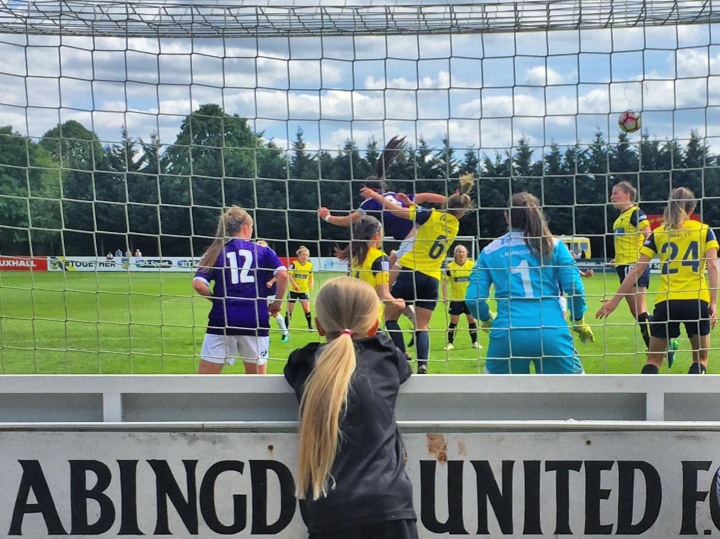 On Tuesday 5 December, Doncaster Rovers Belles announced they would not be submitting an application to be part of the newly proposed professional Women’s Super League, stating that to operate in the revamped top tier would be financially ‘beyond their means’. In issue 91 of popular STAND fanzine, Glen Wilson, speculated this would be the case as he looked at what the FA’s proposal for an all-professional women’s top tier meant for the game’s clubs. His article can be found below…

We’re seasoned enough football watchers, all of us, to know that actual joy is one of the lesser-used emotions spent during a typical 90 minutes. However, there are certain football chants that you only sing with a smile on your face. You sing them only when things are going well, when your club is going upwards, and ‘up the Football League we go’ certainly fits that category.

A fortnight ago, I stood, on an afternoon as bright as it was freezing, in London’s northern commuter belt, watching Doncaster Rovers Belles deliver a perfect attacking performance as they put Tottenham Hotspur to the sword. A fully deserved, professionally executed 4-1 away win from a young squad with bags of potential to go top of the second tier. It should give great hope for the future, but in actuality this is probably as good as it can get.

That’s because in September the Football Association announced plans to again reshape and restructure the top levels of women’s football in England. The upshot of this latest missive is a 14 team top flight (expanded from the current ten), but one which comes, quite literally at a price. The FA want this top division to be fully professional, and as such any team wishing to be in it, needs to apply for a licence; crucial to which is showing that they can stump up the projected six figure sums to be able to afford it. And they were given just six weeks to work out exactly how.

For those women’s clubs happily bankrolled by the owners of their male counterparts – in particular Arsenal, Chelsea, Manchester City and Liverpool – such a figure is of course a drop in the ocean. It’s just a fraction of their matchday takings, or the monthly wage of a second choice goalkeeper. Here’s the cheque, don’t spend it all at once – see you in a year.

But for those without the sugar daddies of male football’s largess it is a sizable sum, and one which it’s hard to envisage ever being within reach. This has already borne out, with Sunderland – who had been forced to go semi-professional after the men’s team’s revenue dropped through Premier League relegation – already confirming that they will not be applying for a top tier license.

Similarly, Watford too have been informed by their men’s club overlords that they will be reverting to a community model, which is effectively double-speak for, ‘we want the kudos of having a women’s football team, but bugger off if you think we’re paying for it whilst 15th place in the Premier League is still up for grabs’.

Yeovil Town, currently in the top tier on merit after achieving promotion last season, are highly unlikely to find the finances. Within twelve months of being lauded by the FA as the ‘club of the year’, they now face being written out of being able to compete with their peers by that same governing body. Likewise, I imagine – though whether they have bid for a top tier licence or not is yet to be confirmed – the Belles; who’ve already been dumped out of the top flight once before at the expense of a wealthier men’s affiliated side, are likely to find themselves unable to find the funding to avoid being gazumped again. 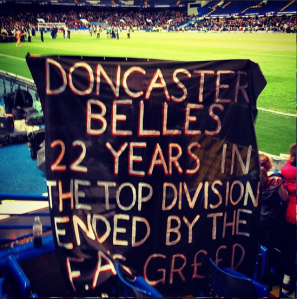 So, who fills these gaps? Well poised to slide into the empty seats at the table, like audience stand-ins at the Oscars, are a host of women’s teams who have never particularly excelled on the field, but have a familiar name and access to men’s team’s bank accounts. Much like getting an in at the Oscars, it’s who you know over what you’ve done. Tottenham Hotspur, who the Belles so comfortably despatched on the field a fortnight ago, are one such club with a bankroll more ready than their team to make the step up; Brighton, also of the second tier, another. So too, reportedly, are West Ham and Derby County, both of whom are currently in the lower reaches of the regionalised third tier.

According to Kate Brazier, the FA’s head of women’s leagues and competitions, the restructure will ‘provide an elite performance environment will produce more and better players, increase the interest and excitement via a more competitive league, attract a greater number of fans and in turn deliver improved commercial viability for clubs and the leagues.’

It’s a bold strategy, and one which – like so many of the FA’s attempts to alter the women’s game – relies, in the interim at least, on putting a large amount of trust in the financial parity of the men’s game. Given that such a model of reliance has killed off Fulham, Charlton, Notts County in the recent past, as well as denting the progress of Sunderland and Watford, it’s not so much a shining path forward as an overgrown dirt-track thick with brambles. Men can’t be trusted; men’s football teams even less so.

As for increasing the interest and excitement, well it may draw a few more fans to those lucky enough to be handed a place in the top fourteen, but what about the rest? What is their to motivate fans, or even players, of the Belles, or Watford, or Yeovil when what they do on the field is always guaranteed to fall second to their bank balance, and the marketability of the male counterparts? Commercial viability over community – it may as well be the FA’s slogan.

This article first appeared in issue 91 of the award-winning popular STAND fanzine, of which copies are still available. We are happy to post out issue 91 anywhere in the world for just £1 plus the cost of postage. If you would like a copy, let us know at popularstand@outlook.com