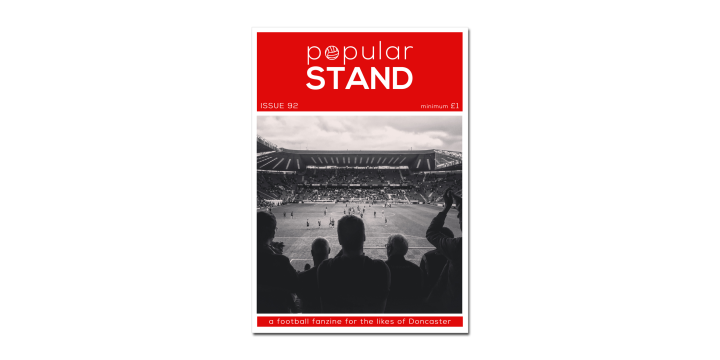 New year, new start? Not as far as we’re concerned, so get set for the same old fanzine, at the same old price as issue 92 of popular STAND goes on sale at Doncaster Rovers’ home match with Plymouth Argyle, this Saturday.

We may no longer be fanzine of the year, having lost out to The Gooner in December’s FSF Awards, but there’s no let up in our quality. In this issue we cover everything from Michael McIndoe to mothers, playing away to psychic parrots. Eclectic is perhaps the best way to describe it; that and unmissable – so make sure you pick up your copy.

Where can I buy it?

We’re set to have three sellers for this issue, and you can find them outside the Keepmoat Stadium before Rovers vs Plymouth Argyle.  From around 1:30pm until 2:50pm we’ll be in position beneath the statue on the path from the lake, and by the Belle Vue Bar, and from about 1.50pm you’ll find one of us outside the South Stand turnstiles too.

If we’ve not sold out before kick-off you’ll also have the opportunity to buy a copy after the match at the entrance to car-park two, but don’t take the chance – three of our last six issues last year had sold out before the match began.

Why should I buy it?

You only need to pay £1 for it. It’s completely independent and written by fellow Rovers fans, for the enjoyment of all Rovers fans. And, all profits go to local charities in Doncaster – we’ve given away over £6,500 in recent years, including £1,500 just last month – so at the very least you’re supporting good causes in your town. So if you can pay more than that £1 please do, it’d be very welcome.