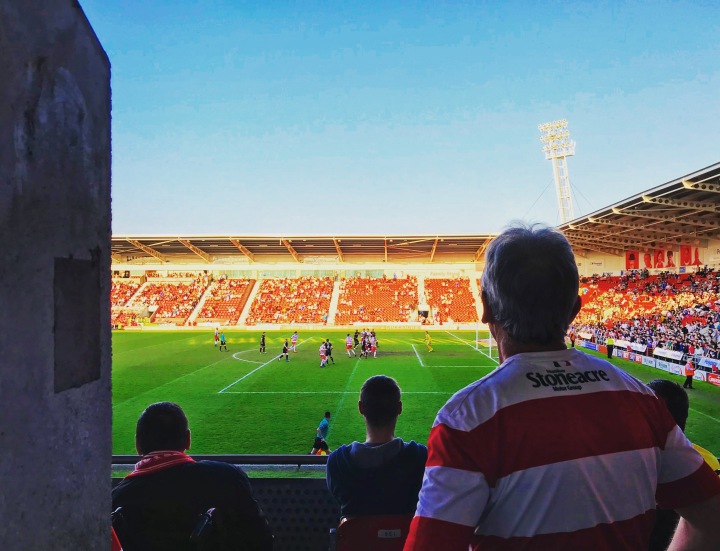 My last report for popular STAND was on a goalless draw with AFC Wimbledon, a game so dull it could’ve been marketed as a cure for insomnia. This 0-0, against table-topping Portsmouth was different gravy, with action and thrills aplenty.

Grant McCann raised eyebrows by leaving out James Coppinger and Tommy Rowe; Matty Blair and Alfie May starting instead. It was Rovers though who dominated the first half, May twice being denied, first by the legs of goalkeeper Craig McGillivray and then by a goal-line Matt Clarke block. John Marquis, Mallik Wilks and Andy Butler all went close and Rovers will have been disappointed to turn round only level.

The second half, with Portsmouth fortified by two half-time substitutions, proved more even. Just before the hour Marko Marosi produced a brilliant point blank save to thwart Gareth Evans, followed by a double save soon after to again deny Evans.

McCann sent on Coppinger and Rowe, and later Alex Kiwomya replaced May, but on 83 minutes Marosi handled outside his area to stop Ronan Curtis reaching a long ball and was dismissed. With all substitutes used Ben Whiteman deputised in goal, but Rovers protected him well and he had to make only one save, from a speculative Curtis effort.

Rovers might even have snatched the points, with the excellent Herbie Kane shooting just wide and Rowe close with a glancing header. So a second 0-0 draw in a week, but Rovers will rue the chances they missed in the first half.