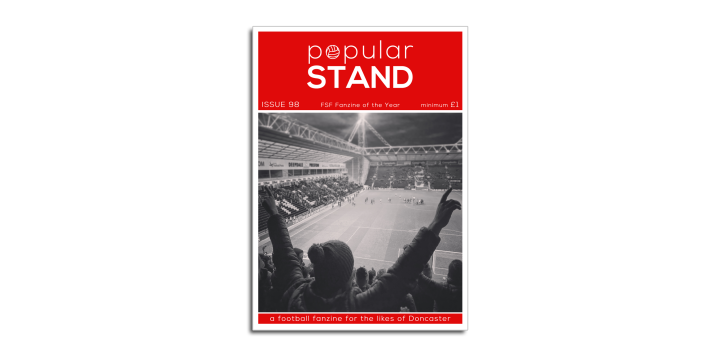 Got a bit of a temperature? Find yourself inexplicably desperate to be in a hat? Can’t go outside without being hit in the head by a form book tossed from nextdoor’s bedroom? Yep, I’m afraid you’ve got Cup Fever, and the only known cure is to get yourself down to the Keepmoat Stadium for Rovers’ twenty-third consecutive FA Cup tie with Oldham. And good news, whilst you’re there you can get your hands on the latest issue of the double-award-winning popular STAND fanzine.

Yep, that’s right, we’re cashing in on the oldest national cup competition in the world to release an FA Cup special. Well, four of the articles in it mention the FA Cup, and otherwise it’s just that issue 98’s release happens to have coincided with this match, but hey, it’s still pretty special if we do say so ourselves.

popular STAND 98 is another packed 40 pages for a start, and it’s still only £1. Aside from James Coppinger there is no better bargain in football. You can find out more about what’s in this issue, and where to find it, below. See you all, Saturday.

Where can I buy it?

This issue will be on sale ahead of Rovers’ FA Cup 4th round match against Oldham Athletic on Saturday 26 January. You’ll find our sellers around the ground up until about five minutes before kick-off; outside Belle Vue Bar from about 1.30pm, beneath the statue at the South East corner of the ground from 1.35pm, and outside the South Stand turnstiles from around 1.50pm.

If we have any copies left post match, you’ll find us at the entrance to Car Park 2 at full-time. However we advise you to buy before the game as we don’t always have copies left post-match – particularly when there’s a big crowd – and to be frank, we’ll be cold and wanting a pint.

Why should I buy it?

It’s double bloody award-winning! So something about it must be vaguely readable. On top of that you only need to pay £1 for it. It’s completely independent and written by fellow Rovers fans, for the enjoyment of other Rovers fans… like you. And, if that wasn’t enough, all profits go to local charities in Doncaster, meaning even if you hate the ‘zine, at the very least you’re supporting good causes in your town. So if you can pay more than that £1 please do, it’d be very welcome.