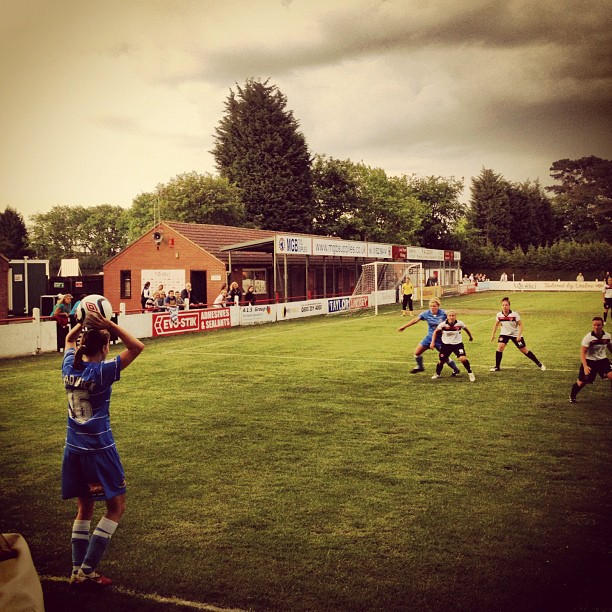 Hard earned, hard fought and a long time coming, but the Doncaster Rovers Belles gained their first points of the 2012 FAWSL campaign with a 2-1 victory over Lincoln Ladies.

The Belles had an early opportunity to take the lead against the run of play at Ashby Avenue as Jess Sigsworth latched onto a ball over the top, but unfortunately the forward’s first touch was heavy, and Lincoln ‘keeper Nicola Hobbs was able to come out and gather.

Doncaster looked like they would rue that chance too as the hosts took the lead just a few minutes later; Lucy Staniforth’s corner from the left finding Daly at the far post to head beyond Mary Earps and into the net. Bouyed by their opener Lincoln continued to press and almost doubled their lead soon after as a sweeping move saw Collette McCallum played in on goal, but Earps was alert and out well to thwart the attack with a good close range save.

As the match approached the half hour mark the Belles finally began to asert themselves on the game; Aine O’Gorman turned her marker inside out on the byline before drilling the ball across goal, forcing Hobbs to turn it behind for a corner. And from the set-piece O’Gorman picked out captain Katie Holtham, but her header bounced up over the bar.

Balls into the box would be the key to the Belles affecting a fantastic turnaround shortly after as they went from 1-0 down to 2-1 in front within the space of a minute. First Alyssa Lagonia made space on the right, pulling back for Lucy Sowerby, and the right-back’s cross was met by Mille Bright, the forward beating Hobbs to the ball to turn the ball home for the equaliser. And straight from the kick-off O’Gorman and Sigsworth pressured Lincoln to force a corner, and O’Gorman’s perfect far-post delivery was bundled over the line at the far post by Holtham.

Perhaps unsurprisingly the Belles spent the second half on the back foot as Lincoln pressed for an equaliser, but a fantastic rearguard display meant that despite much home pressure Lincoln struggled to create genuine chances. A free-kick from Staniforth which was turned behind the near post by Earps at full-length being the closest they came until injury time. With just a minute of added time to go Lincoln thought they had equalised as the ball was turned in from a goalmouth scramble, but the whistle had already gone for handball and the goal was ruled out to ensure a much-needed 2-1 win for the Belles.