Karl Marx has no place in football. He tried once, replacing Ludwig Wittgenstein in Monty Python’s Philosophers’ Football Match, but did nothing to advance the game. As he retired to the dressing room he decided to write about football stratification in Doncaster instead, and he only went and nailed it. 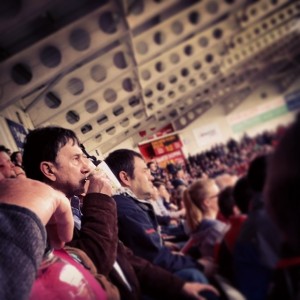 Social stratification works like this; the upper class do their utmost to keep their position, the middle class strive to move up the social stratum and the lower class simply desire equality. It’s a mentality that has governed social order for centuries, but the same principle applies to football fans and league rankings.

Doncaster is home to an array of football fans, or, in the parlance of John Ryan is “a town full of Leeds fans”. Dismayed as our former chairman may have been it is hardly surprising that towns ‘like’ Doncaster struggle to champion civic pride. Football supporters are products of a generation and as Doncaster languished in the depths of the Conference Leeds narrowly missed out on the Champions League final, creating a lure of ‘upper class’ fortunes that was too much for some. Manchester United’s long-standing success – available direct from the television – has also intoxicated a generation of would-be Rovers fans.

But fortunes have turned, and the status of teams such as Manchester United, Leeds and Doncaster are not what they once were. The mentality of their fans, however, lives on. Here’s a brief dose of Marxism and the social stratification of football fans in Donny:

The upper class can’t be anything but upper class. Asking Lord Grantham to live in a downgraded 27-bed property with knock-off whisky and no footman doesn’t sit well with the big man, and he will go to any measure to maintain his status.

Manchester United are trapped in similar aristocratic chains. Adored worldwide they are an iconic football club built on champagne signings and they will strive to keep their position at any cost, going recruitment mad to keep their place in the higher echelons.

The mentality of a Manchester United fan is therefore based on the material qualities of their club. “Yeah but we won the Premier League 20 times”, “we’ve got Van Persie and pay Wayne Rooney £300,000 a week” and we come from a long line of silverware emblazoned monarchs of the football realm.

But empires crumble, and David Moyes may have to resign himself to life as an OBE if he fails to follow in the footsteps of Sir Alex, Sir Bobby and Sir him who played for City and Liverpool before managing them.

The middle class will do all they can to become members of the upper class. In many instances this results in only fragments of their lifestyles becoming gentrified – a wee glass of Prosecco at the weekend and picking off the a la carte menu on payday – but they will largely live their lives idolising their neighbours. Keeping Up Appearancesbuilt six series’ worth of gimmicks on pseudo upper class mentality, but they needn’t have looked further than Leeds United fans.

Leeds are not alone in carrying this trait in the Championship, but they do a bloody good job of showcasing it. They’re a hated club, but most of their rivalries are products of their own making. A dislike of Chelsea, an abhorrence of Manchester United and the frequent clashes with Cardiff, Millwall and most other clubs that have the pleasure of hosting them is a result of the middle class mentality that they should be doing better than they are.

Like Hyacinth Bucket, they will forever be left exasperated by the many misfortunes of their own reality. They may think they ‘deserve’ to be backed by bigger owners and ‘merit’ a higher league standing, but football, like a brother-in-law with a battered sofa on his lawn, proffers realism much better than aspiration.

The working class don’t strive to be anything other than what they are. There’s no masquerade or false pretences. We’re the walking embodiment of Ronseal’s longstanding marketing campaigns, doing exactly what it says on the tin.

A puzzled Man Utd fan in (surprise, surprise) London was the inspiration for this article. We were going through the male greeting formalities one night when he drew his pint from his mouth, stepped back in aghast and with a cockney bellow said: “Doncaster Rovers! They’re shit!”

At the end of the day, we’re just a pub team having a laugh. We don’t suffer from mild depression when we board a six hour bus back to Doncaster after a 1-0 defeat away to Yeovil and we remain upbeat despite resting perilously above the Championship relegation zone. Truth is, we’re happy to be there as it is.

So down at the Keepmoat you’ll never be asked to stand up because you hate Man U or hear songs of your fathers’ shotgun and the Chelsea scum. You’re more likely to become acquainted with “How shit must you be” and “He’s one of our own”, or how we don’t care about Rotherham or Leeds. But while we keep our expectations low, the emotions you feel when you experience the highs are all the more euphoric.

I’ve got no doubt that when I see my first child’s face that there will be tears in my eyes and I’m sure I’ll feel shivers down my spine when my wife-to-be walks down the aisle, but until that date the highs I experienced at Griffin Park against Brentford, and at Wembley against Leeds, and at the Millennium Stadium against Bristol Rovers and at the Britannia Stadium against Dagenham and Redbridge will be hard to beat.

After all, we’re just a pub team.

This article initially appeared in issue 69 of the popular STAND print fanzine. Subscriptions to the fanzine for 2014-15 are now available, take a look at our subscriptions page for further details.