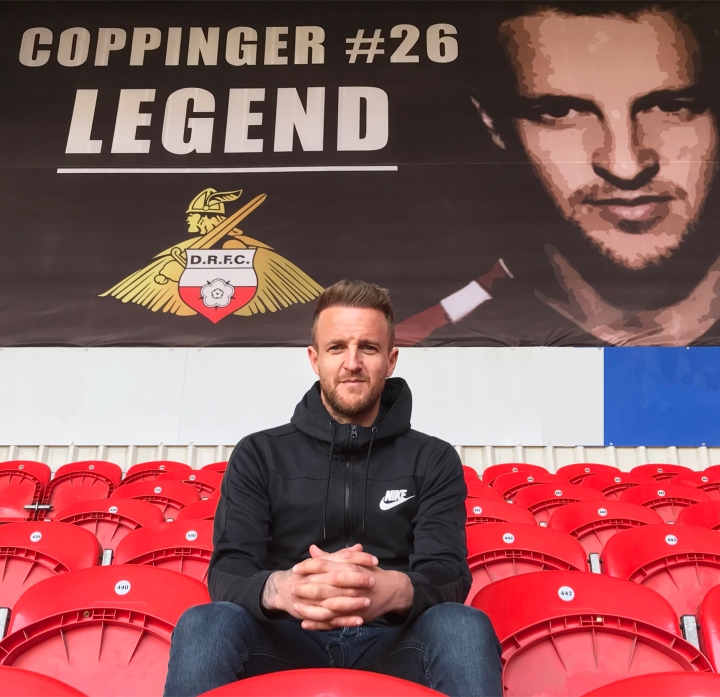 It’s hard to write about James Coppinger without listing the highs and the highlights. So let’s get them out the way early and then we can crack on. Southend United in the play-offs and the highest quality hat-trick any of us will ever witness in the flesh. The hat-trick against Norwich that had us fourth in the Championship. That moment at Brentford to secure the League One title. The goal at Morecambe on his 500th appearance. That injury-time free-kick against Hull.

Any one of those moments alone would be enough to secure Coppinger’s cult hero status. But even when not taking centre-stage, he’s been part of successful ensemble cast after successful ensemble cast. Watch the clips back; when Michael McIndoe scores against Aston Villa, when Graeme Lee heads in at the Millennium Stadium, when James Hayter wheels away at Wembley, when Andy Butler silences The Valley, the first arm around their respective shoulders comes from the sleeve of the number 26 shirt. Whatever highs we’ve enjoyed for the past decade and a half, Coppinger has been right there in the middle of it all.

Doncaster Rovers have played just over 3,900 matches in the Football League, Coppinger has played in more than 15% of them. Forget football, there isn’t anything in my life that offers that kind of reassuring constant. I was 21 when he signed. In his time at the club I’ve finished a degree and had nine different full-time jobs; I’ve had 14 different addresses. Such longevity in football is rare. Such consistency even rarer. Many of our peers at this level have boasted 21st century talents of their own, but how long have they stuck around? A season? Maybe two, before succumbing to the enticement of the grander stands of a supposed ‘bigger club’, or simply the prospect of more zeros on their bank balance.

When I think about Doncaster Rovers I think about Belle Vue and James Coppinger. The former hooked me in, the in-jokes and the sanctity of the Pop Side gave me a sense of belonging and a connection to my home town that has lasted two decades beyond my residency. And the latter has kept me interested for all the years since, kept me excited and optimistic, even through times when the rest of my life has been anything but. What both of these things have in common is that they allowed me to escape adulthood and be a child for a while.

When I think about Doncaster Rovers I think about Belle Vue and James Coppinger. The former hooked me in… the latter has kept me coming back.

The Pop Side was an excuse to take a break from worrying about rent, relationships and the future and sing stupid songs about our forward’s potential burglary haul, or spend ten minutes repeating an full-back’s name in a monotonous tone until he fucked up a throw-in. Coppinger has made it ok for me to normalise having a favourite footballer at an age when it would be more socially acceptable for me to have a favourite cooker hob, and forget about spells being unemployed or depressed because it’s Saturday afternoon and the ball’s coming to his feet, and you know he’ll stun it dead and do something with it that will draw you to the edge of your seat and have you grinning with anticipation before you even recognise what your mouth muscles are doing.

You could forgive someone with such power over men and women if they were a little arrogant, a little aloof. But he’s anything but. As fans we’ll miss his talents, as a club Rovers will undoubtedly miss his reflectiveness and his approachability, he’s embraced the senior pro role as if it was written with him in mind and cast without audition. When I interviewed him for the fanzine two years back he took time to ask questions about me and what I did. I’ve had dates with people who haven’t shown that level of interest. He gave me his number for that interview, and it’s a remarkable tribute to my resolve, that he hasn’t woken up several times since to a slurred WhatsApp voice note intoning “One. More. Year.”

Football sadly isn’t like a favourite television series. We live it rather than watch it. Once you’ve reached the series 11 finale of Cheers and you’ve watched Sam Malone walk out back into the darkened pool room, you need only press a couple of buttons and hey presto you’re back to 1982, watching him stroll back into the bar in the daylight of series one, episode one. We can’t do that with Coppinger’s Rovers career. When he stops playing, the memories begin to fade and blur, and the anecdotes become stretched, until we’re all our own grandparents telling disinterested toddlers how he once struck a volleyed goal so well it burst the net. The major moments, and the highlights will be preserved on film, but we can’t go back to the beginning and watch it all again to appreciate the nuances we missed first time around.

It’s a shame that Coppinger is so pragmatic. If he were a showman I wouldn’t believe for a moment that the final game of this season were to be his last. Sure he’d make it look like his last, coming slowly to the edge of the field looking weary, warm-up jacket placed around his shoulders, a slow shuffle along the touchline… and then BAM! Epic drum beat, jacket thrown down like James Brown performing ‘Please Please Please’. He’s back baby! Back for an encore! Don’t hit it and quit boys, take it back to the top for season 2021-22.

But (sadly), that’s just not his way. And so for all the teasing and the pleading, it looks like this really is it, and to be frank I’m just not ready for it to end. Seventeen years is no time to prepare.

This article first appeared in print in issue 104 of popular STAND fanzine. Look out for announcements on Twitter as to if and when copies of this issue become generally available.