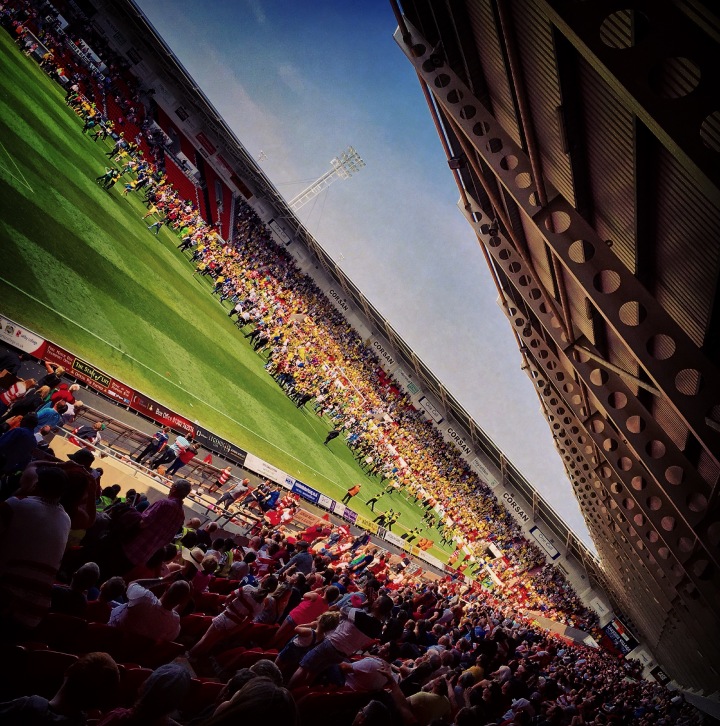 Before the solace of the summer, the last act in a tragic-comedy as Rovers took the curtain to mumble through an epilogue against Burton Albion.

The visitors needed only a point for promotion, whilst a point is all Rovers have looked likely to achieve since the turn of the year. And so beneath the heat of an early summer Sunday, the scene was set for a plodding, eventless ninety-minute preamble to the visiting fans’ inevitable pitch invasion.

In an admirable f**k you to Sky Sports’ live coverage, the two teams conspired to produce a first half devoid of anything meriting even slightest note.

You can’t help but notice Andy Butler at the Keepmoat, he’s on every third poster. Yet until today I’d never noticed just how short his legs are for his body; it’s like he’s moving round on castors. He won a slide tackle early in the second half and I remain bemused by the physics of it.

Burton had the game’s best chance; a one-on-one break that started on half-way and unfolded at the pace of a dream sequence in a straight-to-DVD sports film. Calum Butcher eventually reaching the goal only to for Remi Matthews to save with his legs.

Young William Longbottom came on from an Enid Blyton book to make his debut; impressing with some neat touches in midfield. Andy Williams fell over in the area. Nathan Tyson ran around. Aaron Taylor-Sinclair bumbled about before crocking himself. Same old, same old. Thank Christ it’s all over.