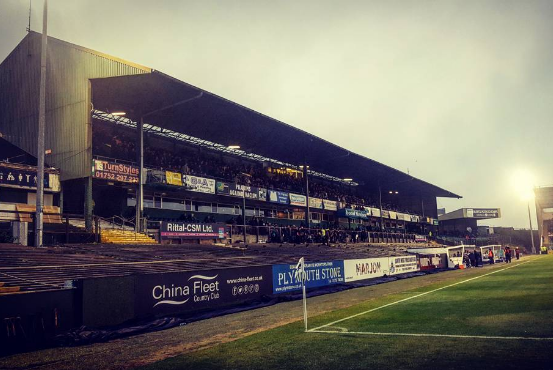 Having run Arsenal close at the Emirates in midweek, players and fans alike pitched up at Home Park with decidedly more spring in their step; and the reignited confidence showed as Rovers rolled over Plymouth.

Captain Andy Butler put Doncaster ahead after 19 minutes; throwing his massive Doncastrian head into a melee few would’ve stuck their feet in, to nod home after Alfie May’s shot had been turned onto the bar by Luke McCormick.

‘Super Luke’ is how the home side’s official twitter account described their goalkeeper when announcing Rovers second goal of the afternoon, though there seemed little to back that up on the pitch. Joe Wright’s header from James Coppinger’s corner was dropped by the keeper, who was then hit in the face by May’s follow-up effort, before John Marquis prodded the loose ball home. Super.

Having been involved in Rovers opening two goals, May finally had the ball in the net himself shortly afterwards as he pounced on another McCormick fumble, this time from Tommy Rowe’s low drive. However, May was embarrassingly mid knee-slide when he finally clocked the linesman’s offside flag.

His blushes were spared though as on 73 minutes he did have the goal his hard work deserved; neatly turning in Rodney Kongolo’s cross for 3-0.

No more goals, but still time for Sonny Bradley to get himself sent off for Argyle; the daft sod foolishly swinging a left hook at Butler right in the referee’s eye-line.

A good end to a rejuvenating week.