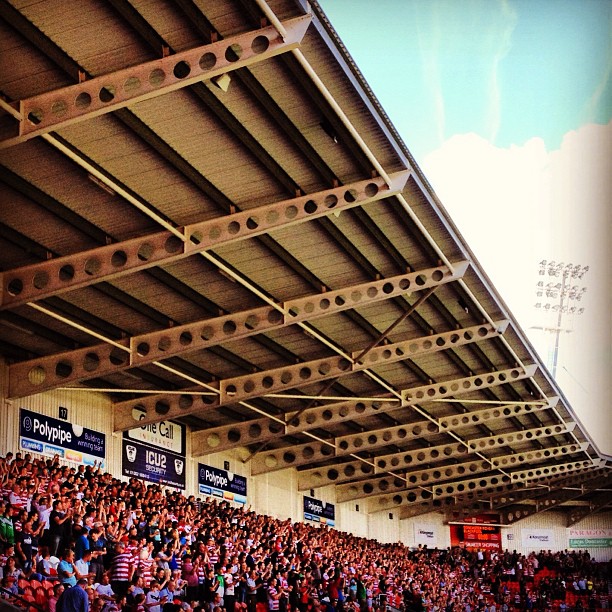 Doncaster Rovers were backed by an increasingly optimistic away following as they earned a deserved victory over Blackpool. Sadly, the sparsely occupied home stands were indicative of an understandably gloomier mood amongst Blackpool’s supporters.

Some sublime touches and skilful runs from James Coppinger redeemed an otherwise forgettable opening forty minutes. Despite the less than immaculate Bloomfield Road pitch, the first Rovers goal was the culmination of an impeccable passing move in the 43rd minute. Tommy Rowe – a constant threat when deployed in an advanced role – collected Alfie Beestin’s pass before seeing his deflected shot sail over the Blackpool goalkeeper to give Rovers a half-time lead.

Blackpool began the second half brightly. The imposing Armand Gnanduillet’s towering header forced an excellent save from Marko Marosi before the home side’s improvement was rewarded with an equaliser in the 56th minute. Jay Spearing’s superb diagonal pass over the Doncaster defence was deftly controlled by Colin Daniel, who then fired past Marosi.

Rovers did not panic following this setback, instead, they patiently retained possession for long periods throughout the rest of the game. As the 70th minute approached, John Marquis was fouled on the edge of the Blackpool area. After both players began the resulting set piece with their backs to the defence, Marquis cleverly flicked the ball to Rowe who powerfully struck the winning goal.

Recently, Darren Ferguson and his players have spoken extensively about their desire to finish the season strongly – if they maintain this level of performance, they almost certainly will.