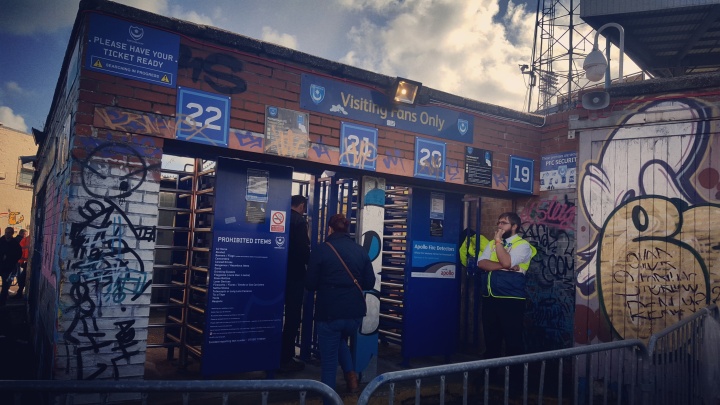 Fratton Park is one of those places that is eternally described as, and feels like, ‘a tough place to go’. It’s hard to know why, especially as going into this fixture Rovers had only suffered one defeat in their five 21st century visits to Portsmouth. Still, despite the favourable history, this was a point any Doncastrian would’ve readily accepted before kick-off.

And that despite Rovers taking the lead in a very un-Rovers like fashion after half an hour. Pompey defender Christian Burgess dithered under a big hoof out of defence, and Mallik Wilks took advantage, winning the footrace onto the ball, before slotting it neatly past Craig MacGillivray.

One nil, and so it remained until ten minutes after the break when the home side were gifted the chance of an equaliser. Marko Marosi and Paul Downing got in each other’s way beneath a tame cross from the Portsmouth left and James Vaughan pulled the loose ball back for Omar Bogle to level the score.

Marosi would make amends as the game opened up, particularly when tipping over a Ben Close effort from the edge of the box. At the other end MacGillivray too had to be called upon; making two excellent stops to preserve the point for the home side; first to turn John marquis low shot round the post, and then saving from Alfie May late on after the forward robbed Matthew Clarke on the edge of the area.