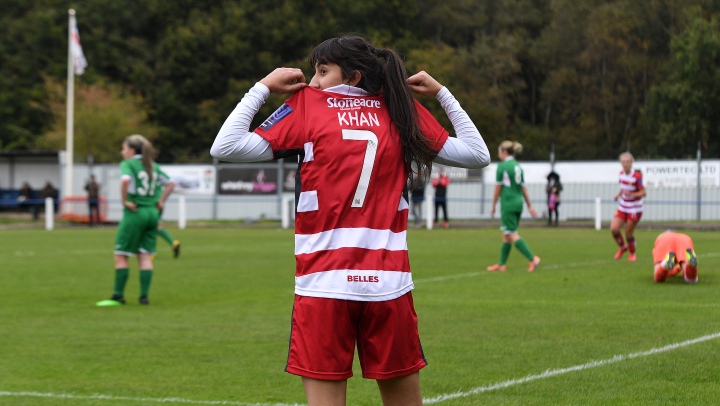 If you thought the two-and-a-half week Covid-19-induced break Rovers had to face in late December was frustrating, spare a thought for Doncaster Rovers Belles. It’s now three months since the team took to the field in National League Division One Midlands, and that’s in a season which saw a six-week halt in November, having not begun until mid-September.

Such a state of footballing flux would be irritating at the best of time, but doubly so for a side that have begun to find their feet again under the management of Rovers own Andy Butler, and Nick Buxton. Positive results and tangible progress on the field after a couple of difficult seasons had created a buoyant atmosphere among the squad, something which midfielder Nadia Khan epitomised in a post-match interview, back in October.

“I’m really happy at the moment, I think the whole team is as well. We all enjoy coming in for training and for matches. Everybody is enjoying themselves, relationships are building and everyone is gelling together really well. On and off the pitch you can see it, in the goals we’re scoring and matches we’re winning.”

Hopefully you’ll recognise the name of Nadia Khan. Not purely because she’s currently the Belles top scorer, nor because of her particularly cheeky goal celebration gifs on twitter, but because the soon-to-be-20-year-old is OUR player. Yep, in case it’s somehow slipped your notice whilst we’ve been hammering out excited #YesWeKhan hashtags of a Sunday afternoon, this season Nadia is sponsored by popular STAND fanzine.

And as a result of that sponsorship, paid for by your subscriptions, we’ve been able to easily guilt-trip get exclusive access to Nadia, to discuss her progress with the Belles, how hard it is to focus in such a disrupted season, and find out about her aims for this season and beyond.

Nadia was born in Leeds, but thankfully eschewed that mob from Elland Road to support Liverpool growing up. A natural wide player, very happy to come inside and commit a path to goal, it’s perhaps no surprise to hear that among her footballing heroes she includes similar minded footballers, Mohammed Salah and Gareth Bale.

So, how did Nadia first get involved with Doncaster Rovers Belles? “I played for Leeds United Regional Talent Club for a year in 2016 and then from there was selected to join the Belles development team in 2017. The following year I progressed to the first team.’ How did that step up to the senior side feel? “I felt as though my hard work had paid off, and that I had achieved a level to be very proud of in such a short space of time”.

That first season with the Belles senior team was a challenging one. Financial shortfalls for the club meant rather than taking a Super League place earned on the pitch, the Belles had to instead step down to the third tier. The players who’d won the Championship title the previous season moved on, meaning a baptism of fire for Nadia and her development team colleagues, as they were thrust into senior football en masse. I asked Nadia how she was able to stay motivated and focussed during such a tough season.

“I’ve a sound disposition and so I was able to handle any negatives during the step up from development to first team without affecting my growth, or my mind-set to learn and become a better player. Plus, my belief in myself and respect for others empowered me to stay emotionally intact”.

Despite the side’s best efforts relegation to the fourth tier followed, but now things are starting to look up again, with a Belles team managed by Andy Butler and Nick Buxton challenging at the right end of the division.

“Being managed by Andy Butler and Nick Buxton is like a breath of fresh air. Andy has brought his experience as a professional footballer to the Belles, and they’ve both shown confidence in the players. They’ve a constructive, positive attitude, and they support a feel of togetherness by praising players to build morale and win games. And for me personally, Andy has worked extensively with me during training to develop my skills”.

But, like a lot of things, that upward momentum has been halted by Covid-19; last season was cancelled, and this season, which has been stop-start throughout, could well go the same way. “As a player the frustrations can be exhausting,” explains Nadia, “especially the lack of games and no physical training interaction”. So, how does the team stay both fit, and connected without training or matches?

“In terms of maintaining my own fitness levels I endeavour to include cardio, strength and conditioning, and resistance workouts every other day. As a team, we’re positively involved in weekly fitness video Zoom calls, alongside Andy Butler and Nick Buxton, where we all take part in exercise sessions”.

It sounds straight-forward enough, but don’t forget this is a part-time squad, and so football isn’t all a Belles player has going on in her life. Nadia has to fit her football career around attending university to study a degree in Accounting & Finance. “Balancing my personal and football life can sometimes be challenging, and so time management is the key to achieve a healthy and balanced lifestyle”.

But despite the complications off the field, when the Belles have been able to take to the pitch, Nadia has excelled. When we took up Nadia’s sponsorship at the start of the season we jokingly demanded a goal a game from the midfielder, or a tattoo of the fanzine logo in a prominent position. Sadly for the town’s tattooist she appears to have opted for goals, with eight so far in nine appearances, putting her on course to meet her own objectives.

“I set myself a goals target for the season, to achieve double figures and be the top scorer. My target through every year I’ve played has been to score a hat-trick, which I’ve already managed this season” (Nadia scored three goals in a 4-0 win at Leafield Athletic in October).

As long term readers will know, Nadia isn’t the first Belles player that popular STAND has sponsored. A few years ago we decided to support a teenager from Killamarsh who’d just broken into the Belles first team; her name was Millie Bright, and 37 England caps later she seems to be doing OK for herself.

“Millie Bright is a great role model and an inspiring player. I believe my drive, enthusiasm and love of the game will find me on the same route to success as Millie, playing for a Super League team and hopefully representing England one day”.

With confidence and mental positivity like that, it’d take a brave soul to bet against Nadia reaching her goals; hopefully she can achieve as many of them as possible with an upwardly mobile Belles side.

This interview, by Glen Wilson, first appeared in print in issue 103 of popular STAND fanzine