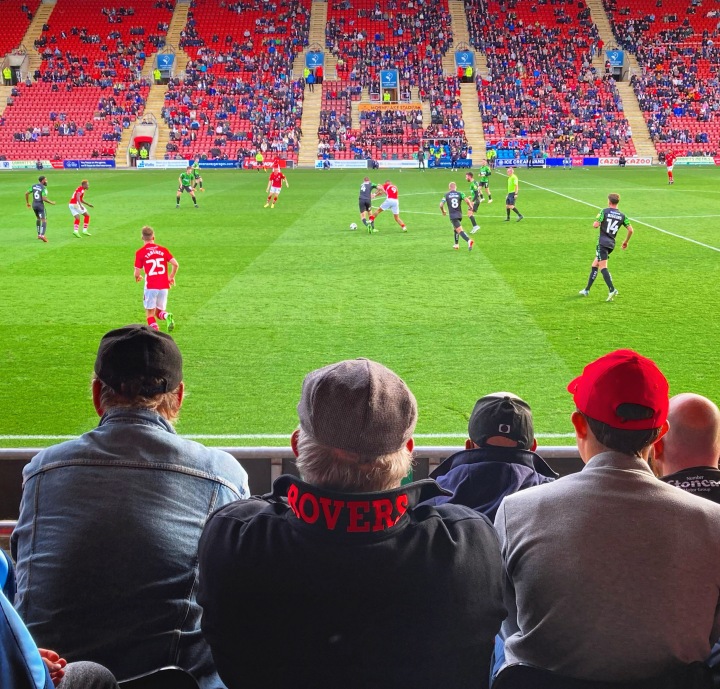 A day for questions; will Danny Schofield have already put his stamp on Rovers? Will we show signs of improvement? And why is every Crewe fan behind that goal a dark-haired teenager in monochrome clothing?

In truth, this was too early – or too complex a question of local genetics – for meaningful answers. Rovers did show signs of improvement on last Saturday, but then the bar was so low it was practically subterranean.

The first half hour here belonged to Crewe; they deservedly led through Courtney Baker-Richardson’s header, and the useful number nine could’ve added more. But 30 minutes in, Rovers woke up, and finally we had a two-team game. Kyle Knoyle volleyed over, Harrison Biggins saw a shot well-saved and then a handball gifted Rovers a penalty. George Miller’s spot-kick was saved, his follow-up headed over. ‘It’s hard work following this team you know’ said an old guy sat nearby; a master of understatement.

Like the first, the second half started with Crewe on top and Rovers ponderous; seemingly hemmed in by their own midfield sitting on the defenders’ toes. It took three good Jonathan Mitchell stops to keep it 1-0, before a rare bit of incisive Rovers play interrupted the tedium to bring about the equaliser; Anderson to Biggins to Miller to the back of the net.

That ignited a 10 minute spell of self-belief in the Rovers when it looked like one point might become three, before the spark slowly fizzled out. A start? More of a preamble.