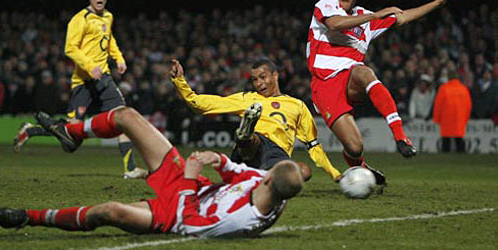 In December 2005, Rovers came within a minute of knocking Arsene Wenger’s Arsenal side out of the League Cup, and reaching their first ever major trophy semi-final. In issue 52 of popular STAND fanzine, produced in April 2011, editor Glen Wilson looked back on that game and wondered… what if?

A cold December night at Belle Vue. A League Cup Quarter Final between Doncaster Rovers and Arsenal. Arsene Wenger’s cosmopolitan collective are up against it, a world away from the marble halls of Highbury they’re having a torrid night, and haven’t fancied it much since Robin van Persie tried to control a ball on the edge of the box and was hit with all the force of a Welsh mountain, or as we know him, Stephen Roberts. Now, as the match enters injury-time at the end of extra-time, they find themselves 2-1 down to the northern lower-league upstarts after Philippe Senderos’ disastrous (yet hilarious) deliberation on the goal-line allowed Paul Green to put Rovers ahead for a second time. They need a goal, and yet the ball is all the way over in the far corner of the field at Paul Heffernan’s feet. What hope have they got?

Instead of falling in a crumpled heap over the ball, or toe-punting it over the Rossington End fence into ASDA, Heffernan tries to play clever and knock the ball off the nearest defender for a corner. Unfortunately, he misses his target. The ball rolls to another member of the Gunners’ back-line and Arsenal are soon on the break in front of a Main Stand packed with Doncastrians desperately checking the position of the big hand. Emmanuel Eboué exchanges passes on half-way before escaping down the wing. Approaching the area Eboué puts in a low cross which bounces agonisingly behind the reach of Roberts’ trailing leg and reaches Gilberto Silva. Leaning back, the World Cup winner manages to hook the ball past Jan Budtz and into the bottom corner to level the scores. The final whistle sounds just moments afterwards and, with Rovers clearly deflated, the Gunners win the resulting penalty shoot-out 3-1.

Arsenal go on to lose in the League Cup semi-finals to Wigan, but still end their season on something of a high by reaching the Champions League final. Despite taking the lead against Barcelona in Paris, they lose 2-1. But their place at European football’s top table is secure for another year as they pip rivals Tottenham to fourth place on the final day of the Premier League season.

Rovers meanwhile go back to reality with a bump, beaten 4-0 by Nottingham Forest on Boxing Day in their next League One outing, followed by a bruising 1-0 defeat at Millmoor on New Year’s Eve. Mercifully some sense of form is regained and Doncaster rally to finish in eighth place, though despite presiding over two promotions and the League Cup run which saw Rovers defeat Manchester City and Aston Villa before taking Arsenal close, Dave Penney’s reign as manager lasts less than a month into the new season.

What if Heffernan had just booted the ball into Asda Car Park?

With Rovers leading 2-1 and injury time fast approaching in the Carling Cup Quarter Final, Nick Fenton intercepts a throw-in and pokes the ball towards Paul Heffernan who duly dribbles it toward the corner flag. With the Pop Stand urging him to waste valuable time by hoofing the ball into the car-park of the adjacent supermarket he does just that, flicking it up neatly before volleying it high over the Rossington End fence. Eventually a replacement ball reaches Manuel Almunia, but his goal-kick is nodded back upfield by a towering Stephen Roberts header, and with the ball back in Almunia’s area Phil Dowd blows for full-time.

Belle Vue erupts, for the first time in their history Rovers have reached a Cup semi-final, and a joyous pitch invasion ensues with winning goalscorer Paul Green carried shoulder high from the field. In a bizarre post-match interview Arsene Wenger claims not to have seen any of the match at all, insisting he’ll not accept the result until he has watched the whole game back later. Dave Penney is also yet to give comment, but that’s because he’s still jumping up and down in the technical area with a look of disbelief permanently etched across his face. In his absence Chairman John Ryan handles the press, and media, and goes on to do so right through Christmas… and January… and the Spring.

And so to the semi-final and a two legged tie with Premier League newcomers Wigan Athletic. Over 6,000 Rovers fans make the trip to the JJB Stadium, and the club’s support is swelled even further by glory-hunting locals who, on their first trip to the stadium for a match that isn’t Rugby League, presume the people in red and white hoops to be the players and fans of Wigan. The unrest in amongst the home support extends onto the team and incredibly Rovers take the lead as former Latic, Neil Roberts scrambles in a goal from a set-piece. Wigan equalise through Paul Scharner with quarter of an hour still to play, but Rovers, thanks largely to heroics from goalkeeper Jan Budtz – who at one point saves a point blank effort from Jason Roberts with his oversized quiff – hold on to end the first leg with a 1-1 draw.

For the return match Belle Vue is a sell out and, despite the presence of television cameras, Rovers fans can be spotted, as they were for the Division Three promotion game, in the nearby trees, on the roof of ASDA, and on ladders borrowed from the houses of Belle Vue and leant against the fence behind the Pop Side. The guttural roar from the terraces is deafening, the match is tense and fraught, and ultimately settled by one goal scored in the final minute. Michael McIndoe getting to the left byline, whips in a cross which flashes across the six-yard box and cannons into the roof of the net off the arse of Leo Fortune-West, the forward having bent down to tie his shoelace. Belle Vue erupts, another pitch invasion and another victory, Rovers are in the Carling Cup Final.

For a month Cup Final fever grips the town. The ASDA adjacent to Belle Vue unveils a bronze football statue, cited in the exact place in their car-park which Heffernan’s hoofed clearance against Arsenal landed. Sadly though the supermarket is forced to remove the monument within a week after it trips half a dozen unaware Doncastrian pensioners, and a further twenty-three adult males suffer broken toes having been unable to resist the urge to try and boot the ball across the tarmac.

Sean Thornton seizes the opportunity to resurrect his rapping career, launching Doncaster Rovers’ Cup Final single, a reworking of a Sir Mixalot classic, I Like Jan Budtz and I Cannot Lie in honour of the keeper’s heroics at the JJB Stadium and in the earlier penalty shoot-out against Manchester City. The record goes platinum, but even manufacturing it with novelty metals can’t help shift that many of them and it peaks at 67 in the charts. Rovers’ progress to the final is not completely without disappointment though as the added exposure of the cup run sees McIndoe leave the club for Premier League Portsmouth in the January transfer window.

Come the day of the final and over 30,000 Rovers fans (well, 15,000 fans and 15,000 hangers on) travel to Cardiff’s Millennium Stadium, but it is a disastrous day for the team as Manchester United cruise to a 7-0 victory with Ruud Van Nistelrooy and Wayne Rooney each grabbing a hat-trick; Cristiano Ronaldo scoring the other. The only bright point for Rovers fans comes late in the game when Fortune-West, on as a substitute inadvertently wipes out the preening Ronaldo whilst appealing for a throw-in.

After their big day Doncaster return to the comparatively humdrum world of League One where, with minds distracted by the Cup dates and lacking the pace and skill of McIndoe on the left, their form has slipped to leave them looking nervously over their shoulders at relegation. However, the team rallies in the coming months to finish 15th. In the summer Dave Penney moves north to replace new England manager Steve McLaren at Middlesbrough and takes Paul Green with him to the Riverside. Keen to capitalise on the extra fans which followed the club’s Carling Cup progress John Ryan goes after a big name manager to succeed Penney and brings Doncaster-born Kevin Keegan to the club.

Keegan makes a couple of big name signings, bringing in both Billy Sharp and Andy Keogh from neighbours Scunthorpe and Rovers look to be on course for promotion. However, the club loses its grip on second place in the closing weeks of the season and after a defeat at Yeovil in the penultimate match Keegan goes into a bizarre rant about Bristol City manager Gary Johnson on Radio Sheffield claiming that “they’ve still got to go to play Rotherham and get something, and I tell you what I would love it, love it if we beat them.” City do get something against Rotherham… promotion and Rovers crash out in the play-off semi-finals to Blackpool.

As for Arsenal, the humiliating reports of their Cup exit to Doncaster go global and they subsequently fail to capture the signing of Emanuel Adebayor, who instead signs for fourth place Tottenham. Without the presence of the Togolese forward Arsenal can only finish the season in fifth place and to add insult to injury Tottenham secure the fourth Champions League spot thanks to the goals of Adebayor. Such a disappointing end to the Gunners’ final season at Highbury means the pressure is on Arsene Wenger going into the following season. When, in 2006-07, Arsenal fail to reach the UEFA Cup knock-out stages after defeats away to Besiktas and Bayer Leverkusen the writing is on the wall for the under pressure manager, and Wenger is duly sacked in December… a year to the day after that defeat at Belle Vue.