I’ve had Carly Simon in my head all day. I’ve had worse days. Yesterday Doncaster Rovers signed Curtis Main, prompting a messageboard thread on what fans should sing for him. Alas a Purple Rain adaptation would be hard to build in to, whilst the insanity of Cypress Hill just won’t scan. Thankfully Snod’s Shinpad, in a moment of inspiration akin to that when he chose his username, suggested a revision of the Carly Simon hit. And so Curtis Main, you’ll probably think this song is about you.

ove this suggestion, not just because it’s very good, but because it’s original. It’s not ‘y’know, like the Kolo Toure chant’. No, it’s a song by us, for one of us. Will we sing it? I hope so, but it’ll probably be drowned out by ‘Curtis, Curtis Main’ to the Daddy Cool tune to which we heralded Billy Sharp. Sadly, there is a distinct depreciation of humour and individuality in the songs we sing at football.

Why? I guess it comes down to who is more vocal in your current fanbase. Unfortunately for Rovers, quite often its gurning bell-ends in expensive anoraks who wear tracksuit tops in 30 degree heat; the sort of folk who instagram themselves posturing in a ginnel, clutching a can of Fosters left over from dad’s 40th birthday barbecue. Hashtag awaydays. Hashtag casuals. I suppose it’s inevitable that wit and repartee will be short in supply when your very existence is a Bugsy Malone, Green Street mash-up. Still, it beats double humanities, so it’s hard to see why they’re all so angry.

This is also the generation of YouTube and – God help us – The Lad Bible. Why come up with your own songs, when you can pick a video of the internet and ‘just swap Tottenham for Rotherham yeah?’ ‘Class’ ‘Decent’ ‘Quality that’. Or just bash out whatever everyone else is singing; “We love you, we love you, we love you, and what St Pauli sing we follow, we follow, we follow, because we’ve all been on YouTube, on YouTube, on YouTube…” And of course, #nopyronoparty; the hashtagged solution to life’s complexities. Whatever your stance on flares at football, surely we can agree that no amount of pyro is going to make a pre-season friendly at Lincoln feel like a party.

It wasn’t always like this. We used to have a laugh, and a sense of perspective. And so the places we went weren’t always ‘a shithole’ and we could quite easily wait to go home. We used to sing about how ‘we never score from a corner’ and call Neil Campbell ‘Goals Campbell’. There was the time Rob Woodmansey tried taking a Christmas tree into the away end at Scarborough, the ‘Give us a W, Give us a B’ childishness, and the infamous ‘twelve steals of Blundell’. We were, on the whole, self-deprecating, and, perhaps because all our vehemence had been spent in 1997-98, much less angry too. When did it all get so serious? 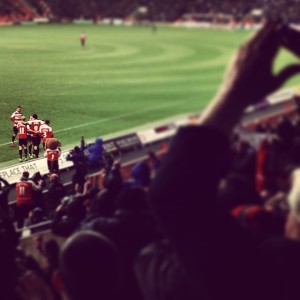 I always wanted fun from the crowd I stood in, today people want ‘atmosphere’. Nothing wrong in that I suppose, but it shouldn’t be at the expense of the former. And of course, neither should be at the expense of morality. This week one of our contributors, who also happens to be a season ticket holder at Leyton Orient, has been taking O’s fans to task for singing a sexist song. And rightly so. The argument ‘we’ve always sung it’ is not a justification, merely an angst-driven excuse. #nosexismnoparty I suppose.

The song is one I’ve sung too, but then I’ve always baulked at the key words and instead proclaimed Doncaster to be ‘full of duh de-deh and Rovers’.  Yes Doncaster is wonderful, but as football has become more inclusive, can we acknowledge that it is only full of tits on Leger weekend, and even then that is in a much different sense. We don’t need to sing this song. We’re not Andy Gray. We’re better than that. Less Keys, more Carly.

So please, commit that Curtis Main song to memory, and bellow it gloriously out of tune when he first finds the net. Because that is what banter is. Not goading the opposition, not dishing out abuse to players from behind an egg on twitter, not spreading your arms out wide smugly when the opposition come within an inch of making it 3-0. It is humour, and irony, and an acceptance that whilst we may sing about being the greatest team in football, we are very far from it, so we may as well just quit posturing and start partying. Without pyro.

One thought on “Game of Chants”