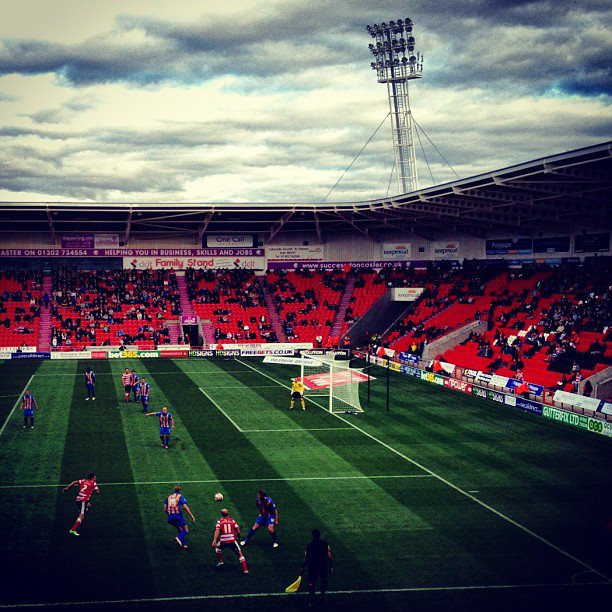 Like Doncaster Rovers circa 2016, the England cricket team of the 1990s boasted a Gooch and a Stewart in their ranks. They also often gave the impression that their team had been selected via the expedient of drawing names out of a hat. Rovers’ XI for the ‘must win’ game against Shrewsbury Town suggested some kind of random process at work.

It all became clearer when the teams lined up. A flat back four, a midfield diamond with Luke McCullough and Lyndon Gooch at the points, Conor Grant and new signing Riccardo Calder at the edges; and Liam Mandeville partnering skipper Nathan Tyson in attack.

Rovers’ new formation certainly gave them energy and they dominated the first half against wary visitors who offered little attacking threat. Rovers’ best opening came when McCullough’s 25-yarder was tipped over by Jayson Leutwiler. Sadly, familiar failings were on show. Too many misplaced passes, poor final balls and indecision around the area. Still, they went in at half time ahead on points, if nothing more tangible.

At the start of the second half, however it appeared that Darren Ferguson had handed over his team talk to a stage hypnotist who had been called away before he got round to the bit where he says ‘when I click my fingers you will wake up’. Rovers were hesitant, dreamy almost, and Shrewsbury sensed a route into the contest. Nevertheless, only a well-placed defender prevented Andy Butler’s downward header from a corner giving the home side the lead. A corner at the other end was more decisive: Shaun Whalley’s in-swinger was inexplicably ducked by Grant and Thorsten Stuckmann was unable to reach the near post before the ball swerved in. Andy Williams had come on just before the concession and headed over from a few yards out when it seemed easier to equalise, but generally Rovers’ play was laboured and maladroit, offering few threats to the Shrewsbury goal. As time ticked down, Rovers almost got a lifeline from an old friend. Richie Wellens, on as a substitute, tripped Cameron Stewart on the edge of the box. Stewart curled the free-kick over the wall but Leutwiler tipped the ball onto the post and to safety.

The ‘must win’ game was lost and with only three points from the last 27 Ferguson must wonder where the next win is coming from. I certainly do!