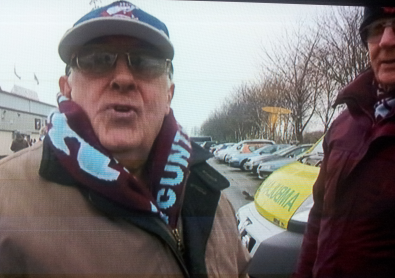 I’m a complicated soul; I like orange juice but not oranges; dark beer but not Guinness, and though I consider Rotherham our biggest rivals, anticipate games against Scunthorpe more eagerly. So after flogging fanzines in the sort of wind that would have had Captain Scott deciding on a duvet day, I was grateful for the warming sensation that came with rattling in two early goals against the daft metallic bastards.

As is the way with this Rovers side they went at the visitors from the off. Mallik Wilks marauded down the right before cutting the ball into the path of Ben Whiteman, and his mighty thwack gave goalkeeper Jak Alnwick no chance.

The Iron’s poor start duly got worse when Charlie Goode’s touch didn’t live up to his name and Herbie Kane pounced, whisking it off the clumsy galoot’s toes with one kick before dinking it over Alnwick with the next. Chim-chimenee chim-chimenee chim-chim che-roo, not even lunchtime and we’d already scored two.

The match won in nine minutes, things inevitably fizzled out. For the next hour or so Scunthorpe had a fair bit of the ball, and covered a fair bit of ground, but rarely did owt with either. It was dull, it was tedious, it was ineffective… it was us a year ago.

With five minutes left John Marquis finally gave us reason to get warm again; taking the ball in his stride to ride one challenge and slot into the bottom corner for 3-0. Happy bloody Christmas.