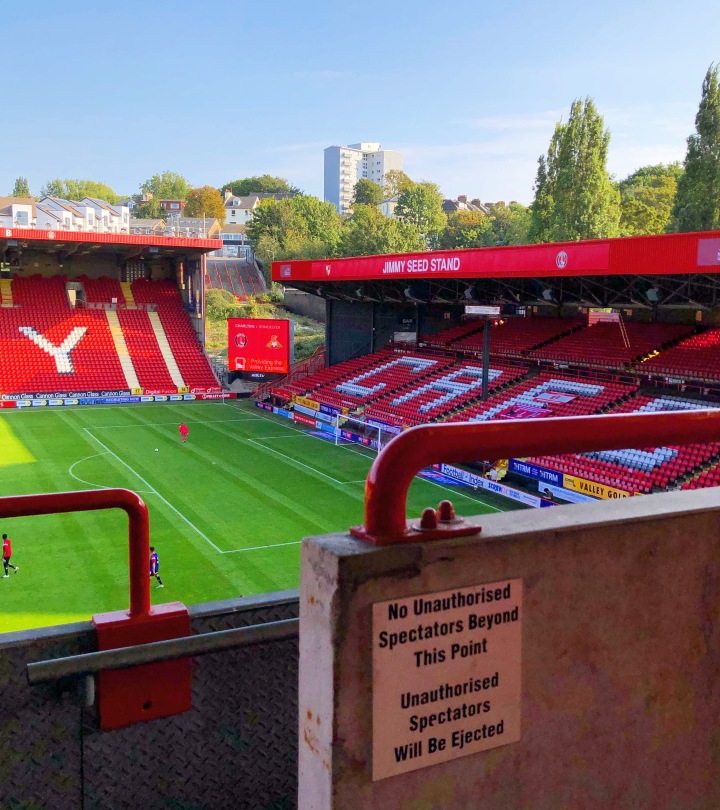 It’s 19 years since I left Doncaster but I’ve not lost the accent. Nor have I lost that ingrained sense of pragmatism that comes with growing up in the town. So before the fixtures had even been released for the current season I’d come to the terms with the fact I was unlikely to see Rovers play in it. I haven’t had a season ticket in a decade, I live 200 miles away. If there’s to be a pecking order I’m lower mid table at best.

But then James Coppinger announced this season would be his last, and I couldn’t miss that. Not all of it. There had to be a way in. So I took a pot shot and offered my services to the club should they be hit with travel restrictions and need another body at Charlton Athletic, a club within walking distance of my flat. I hadn’t expected success; no matter how sincere my prose, it was a clear and obvious blag. Yet five days later there I was, strutting like the Hoffmeister Bear as I made my way towards The Valley to collect my media accreditation as ‘guest summariser’.

Between taking my punt and claiming my reward, the match became a test event; opened up to 1,000 home fans. And so on the walk along Woolwich Road, I began to spot Charlton shirts and scarves. There’s something warmly reassuring about following another fan towards a match. There’s the nostalgia, of a time when this was how we found football matches; out the station, follow someone in home team colours until you see floodlights (a largely foolproof method aside from the one time I followed a Cobblers fan for a mile across Northampton before he casually turned into his front gate).

What L.S. Lowry he captures in ‘Going to the Match’ is not so much optimism or excitement, but routine. And it’s that sense of just another Saturday that those of us heading to The Valley are embracing.

There’s also the connection; the shared sense of anticipation that grows as more fans emerge from side roads, pubs and buses to join the unregulated marchers until the stadium comes into view, and before you know it you’re all in a modern day re-enactment of L.S. Lowry’s ‘Going to the Match’.

Lowry may have painted factory chimneys and two-up two-down terraces, rather than the retail parks and ‘luxury apartments’ of present day SE7, but the essence of the scene is much the same. That’s because what he captures in Going to the Match is not so much optimism or excitement, but routine. Head down trudges born out of duty rather than eager skipping. And in this moment, after an unexpected six months off, it’s that sense of just another Saturday that those of us heading to The Valley are embracing much more fervently than any perceived outcome of the game itself.

It’s 1.30pm and outside the stadium, masked fans already mill about quietly; instructed to arrive early to help comply with protocol. Clipboard-hugging folk in high-vis tabards and big white face-masks stand between them and the entrance giving the impression of a carefully organised sawmill tour, rather than a League One football match.

These protocols, and the many steps and stations I had to pass to get into the press seats contributed to probably the safest and most cautiously managed environment I’d set foot in since March. It’s what I would expect in the grip of a pandemic. I feel much safer here, than I could in the pubs and restaurants the government has been nudging me back to with discounts and encouraging winks and all the subtlety of a dealer offering a gateway trial.

So I may be here on a blag, but it’s not one without substance. I know the ropes, and know the three-pronged formula for live broadcast success. Point 1; do your research and have plenty of notes. Point 2; ensure the main commentator isn’t going to drop you in it by overselling your insight – I have no idea nor experience to speculate what Darren Moore is thinking. And point 3; always take a second to think ‘what would Robbie Savage do?’ and then do the opposite.

As kick-off approaches I make a last bathroom break. The upper concourse at The Valley offers an open-air view over the car-park and the surrounding streets. Ordinarily at 2.45pm these spaces would be buzzing with chatter and chants of those fresh out the pubs, of yells to advertise programmes, fanzines and raffle-tickets. But with everyone safely inside already, it’s eerily silent, so much so I can hear a bored steward shuffling their feet on the tarmac way down below. It’s a reminder that this is but a small step in a long road back to pre-2020 Saturdays.

I’d feared that allowing only home fans to attend would give Charlton an unfair advantage, and though their noise is louder than expected, in a ground this vast it rarely creeps beyond the vibe of pe-season friendly. In fact, after so much football watched to a soundtrack of synthesised chants, it’s nice to hear a crowd reacting naturally. Just ten minutes in an irate Charlton fan screams ‘fucking get hold of the fucking ball!’ as if he’s never been away – not even the best sound engineer in the country would think to programme that.

Though Coppinger’s involvement was restricted to a late cameo; an impressive 3-1 win delivered a welcome bonus on my blag, and the extra endeavour of preparing reems of commentary notes it brought. Chances are that even by the time you read this I’m the only Rovers fan to have seen the side play live this season, and I’m incredibly grateful for the experience.

And as I set off back down the Woolwich Road between the home shirts and scarfs now heading in the other direction I was also glad of my facemask. Not only was it protecting me from coronavirus, it was also hiding the massive grin that would’ve surely given me up as the only fan leaving a 3-1 win rather than a 1-3 defeat.

This article appeared in print in popular STAND fanzine issue 101, and an alternate draft also appeared in issue 403 of When Saturday Comes.